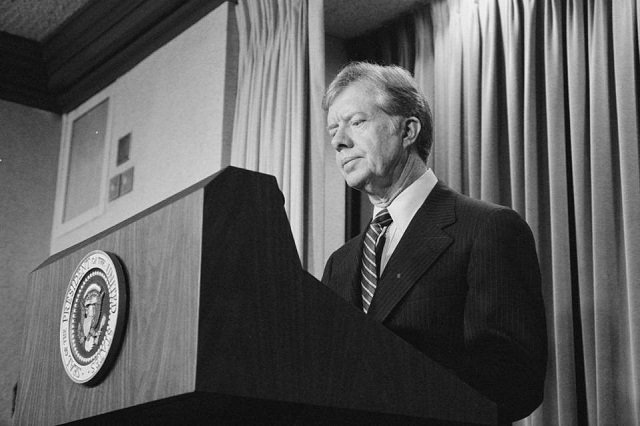 October 6, 2015 10:04 pm 0
For Every Carter, There is a Reagan
See the Movie ‘Farewell’, Then Ask Who is Running America
Jimmy Carter ushering Khomeini started all the terror

Unlike Obama, Carter was at least willing to learn from his mistakes.

“I think of Jimmy Carter as the good old days.”

The speaker was the American Enterprise Institute’s John Bolton. A veteran of the Reagan, Bush I and Bush II administrations, Mr. Bolton was in New York last week for the United Nations General Assembly. He was responding to a newsman who’d asked him if he thought Barack Obama was as bad as Jimmy Carter.

Over the years, Mr. Carter’s name has become a synonym for American weakness abroad and decline at home, the former represented by the Iranian hostage crisis that plagued him until his last moments in office, and the latter by an economy that introduced American working families to words such as “stagflation.” Not until Ronald Reagan succeeded Mr. Carter did Americans see policies that would unleash the U.S. economy and eventually bring down the Berlin Wall.

Even so, there’s a serious point in Mr. Bolton’s quip. Mr. Carter may indeed be the gold standard for fecklessness and malaise. But toward the end of his tenure, President Carter proved himself capable of something that still eludes President Obama: a willingness to learn from mistakes and reconsider options.

Start with the economy. In the summer of 1979, Mr. Carter, like President Obama today, had less than two years left as president. It was a time of gas lines, double-digit inflation and high unemployment. So what did Mr. Carter do?

That July he named Paul Volcker chairman of the Federal Reserve. The appointment was a vote for tighter money and a stronger dollar. At his first news conference after his nomination, Mr. Volcker was unequivocal: “Inflation certainly is the priority.”

The appointment was a gutsy move, because a vote for tighter money was almost surely a vote for strong economic medicine that, in the short term, would make the president’s re-election more difficult. Mr. Carter said his pick for Fed chairman shared his “determination to vigorously pursue the battle against inflation at home and ensure the strength and stability of the dollar abroad.” In the end, Mr. Volcker tamed inflation just as he set out to.

Then there is Mr. Obama. Almost seven years after he entered office, ObamaCare remains as inefficient and unpopular as ever; a record number of Americans have dropped out of the labor force; and economic growth remains tepid. Yet when he’s not blaming George W. Bush for any economic sluggishness he’s prodding Congress to spend even more or pushing for more government control over business.

It’s no better on foreign policy. Again, the comparison with Mr. Carter is illuminating. At this point near the end of Mr. Carter’s term, our people were about to be taken hostage in Iran, our Western European allies were fretting over our drift and indecision, and Mr. Carter’s chief foreign-policy goal remained getting Senate approval for the Strategic Arms Limitation Treaty II he had signed with Leonid Brezhnev.

Then the Soviets invaded Afghanistan.

It came on Christmas Eve 1979, the first Soviet invasion outside the Eastern bloc. But this time, the world saw a different Jimmy Carter. Just days after the invasion, in an interview in the Oval Office, ABC News asked Mr. Carter if he believed Brezhnev was lying, Mr. Carter said he was.

“My opinion of the Russians,” he said, “has changed most drastically in the last week.” Later in the interview he underscored the point, saying the invasion had made “a more dramatic change” in his reading of Soviet intentions than anything they’d done before. He felt betrayed.

And what did this new appreciation for the true nature of the U.S.S.R. mean for American policy?

It meant a boycott of the 1980 Summer Olympics in Moscow. It meant the imposition of embargoes on grain and high-tech goods. It meant stepping up aid for the anti-Soviet Afghan resistance. And it meant withdrawing from the Senate the one thing he had devoted his presidency to, his beloved SALT II Treaty.

How different is Mr. Obama’s path. Within weeks after Congress failed to block his nuclear treaty with Iran, and a year and a half after Vladimir Putin annexed Crimea, it now appears that Iranian and Russian troops will both be fighting in Syria to prop up a butcher whom Mr. Obama has said must go. But rather than see such developments as a reason to reconsider his whole approach—as Mr. Carter did in his day—Mr. Obama said on Friday he just told Mr. Putin he’d be “prepared to work with him.”

Jimmy Carter made wiser by hard experience was still Jimmy Carter, and it would take a former Hollywood actor to get the economy growing and put the Evil Empire on the road to collapse. But give the Georgian his due: When it became clear his approach was advancing neither peace nor prosperity, he was willing to change course.

Is there any intrusion of reality that could ever persuade Mr. Obama to do the same?

Plan A, Plan B, or No Plan at All
See the Movie ‘Farewell’, Then Ask Who is Running America
Jimmy Carter ushering Khomeini started all the terror
Slippery Barack Obama 973