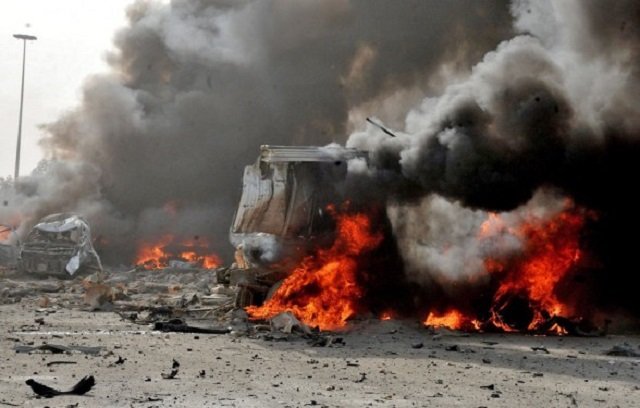 Twenty-one people, including four children and six women, were killed when a minibus hit a mine in the southern Syrian town of Noa on Wednesday, activists on the ground said.

Opposition activists said the minibus drove over a mine planted by forces loyal to Bashar al-Assad. There was no immediate comment from the government.

The explosion was reported in rebel-held territory in Deraa province but army troops are also stationed in the nearby base of Tel al-Jumaa, which is besieged.

Assad’s forces are battling an uprising that grew out of protests against his family’s four-decade grip on the country.

Violence has continued in recent days despite pleas from Arab and Muslim organizations for a ceasefire to mark the Muslim festival of Eid al-Adha.

The British-based Observatory, which is opposed to Assad, reported clashes in most provinces on Wednesday and said warplanes had been deployed to the eastern desert city of Deir al-Zor.

The group said at least 27 government soldiers had been killed during intense clashes in Deir al-Zor over the past two days although rebels gave a figure more than double that.

Pro- and anti-government militias have fragmented the country into fiefdoms, with hardline Islamist rebels fighting Kurds and other opposition groups.

The Observatory reported that 29 jihadist fighters, some from the al Qaeda-linked Islamic State of Iraq and the Levant, and 12 Kurdish militants were killed during clashes on Tuesday in the northeast province of Hasaka.

It is increasingly difficult for international aid workers to operate in the lawless rebel-held northern provinces.

Six Red Cross workers and a colleague from the Syrian Arab Red Crescent were abducted on Sunday after delivering medical supplies in the northern province of Idlib. Four were released the next day.

Aid workers say the Damascus government has also placed barriers on working in Syria such as rejecting visas or preventing convoys from entering certain areas.

Syrians complain aid is not getting through to many areas of the country, especially to residents living in rebel-held territory who say the government is restricting access.

ICRC spokesman Ewan Watson said his group was asking “all authorities for access” to Mouadamiya southwest of Damascus, where he estimated 10,000 civilians were trapped.

“We are concerned about the situation in the besieged town of Mouadamiya, under siege for 10 months. We have not been able to enter and suspect there are medical care needs and possibly of essential aid like food and water,” he said in Geneva.

Assad has agreed to a U.N.-endorsed mission to eliminate his chemical weapons, a move widely seen as a concession to avoid U.S. military strikes after an August sarin gas attack in Damascus that killed hundreds in rebel-held areas.

Experts from the Organization for the Prohibition of Chemical Weapons have visited 11 of a total of around 20 declared sites where they are due to oversee the destruction of Syria’s chemical arsenal and production facilities, the organization said on Wednesday.

The OPCW – which last week was awarded the Nobel Peace Prize – said in a statement its activities so far included “critical equipment destruction at six sites” as well as some rockets designed for use with chemical weapons.

The most complex stage of their work, the destruction of chemical agents and precursors, has yet to start and the teams will likely have to visit at least one site – near the northern town of Safira – where fighting is continuing.

Add “dopey” to Obama’s resume
The Divisions Between the FSA and the SNC Widen
Why Does It Take a Fire?
Syria News 1210 Syrian Revolution 1352