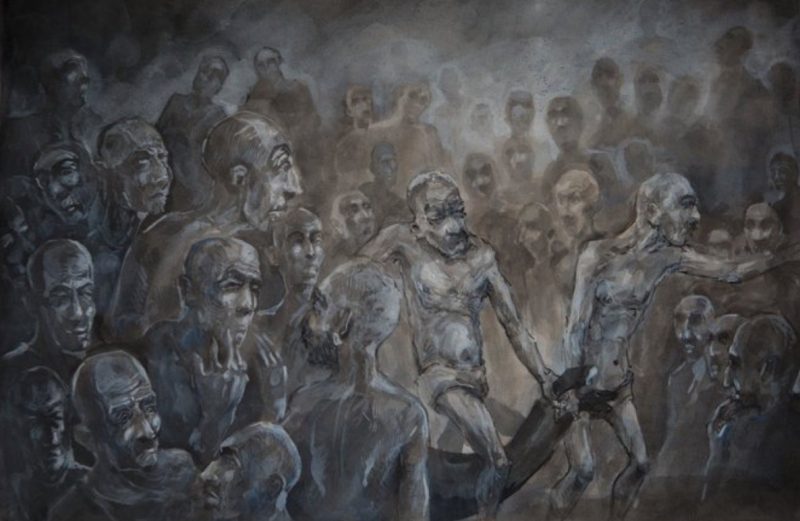 Haunted by Memories of Syrian Torture, Saved by Art

February 2, 2018 9:31 pm 0
Asma Assad is Free of Cancer, Her Husband is Free to Bomb Hospitals
Bravo Nadia Murad. Hey Nobel, What About Assad Sexual Crimes?
Assad Supporters Feeling the Pinch of Their War

As an accomplished artist in Syria before the war, Mr. Bukai had long thought his photographic memory was his greatest asset, allowing him to recreate scenes on his sketch pads and canvases days, months and even years after he witnessed them. But now, after he has survived two stretches in the Syrian government’s notorious detention centers, his sharp memories only serve to haunt him.

One day recently, home with his family in Fontenay-le-Comte, a sleepy city in the Loire valley, he methodically opened boxes containing dozens of drawings he has made of the images burned into his brain. It is the only way he knows of coping with the traumas he witnessed, and suffered, in Syria’s torture chambers.

In one, men wearing only their underwear carry a corpse in what looks like a sheet or blanket, for eventual disposal, Mr. Bukai says, in the back of a truck in a pile of other bodies. He recalls a number, 5535, on the young man’s chest. They had been ordered to strip to their underwear, Mr. Bukai explained, so they could be easily spotted if they tried to escape.

“Art saved me,” he said, while laying the drawings out on a tabletop.

His art reminds many critics of the work of the Slovenian artist and Holocaust survivor Zoran Music — haunting, dark and extremely realistic. In his drawings, some prisoners hang by their hands and others undergo other forms of torture, all while their cellmates eat their meals calmly, desensitized to the displays of inhumanity around them.

“I was observing everything and making art in my head,” he said about his time in a crammed cell, where prisoners had to take off their clothes because of the unbearable heat.

He still remembers the smell of rotten flesh, the screams of other prisoners and how, horrifically, he and others grew accustomed to it all.

Today, Mr. Bukai (pronounced boo-Kay) travels across France to raise awareness about the horrors of the detention centers, while the French publishing house Éditions du Seuil is preparing to publish a book of his drawings.

His experiences during Syria’s civil war were not all that different from those of tens of thousands of other young men who took to the streets demanding democracy and human rights — except, perhaps, in that he survived. He was arrested three times for his participation in the protests. He was incarcerated in 2012 for a month, and for 11 months in 2014.

According to rights groups, the government of President Bashar al-Assad has tortured tens of thousands of political opponents, many of whom have never been seen by their families again. No one knows exactly how many disappeared.

“I have not seen anything like the methods of torture that the Syrian security services have used in any other country,” said Sara Kayyali, a researcher with Human Rights Watch.

Mr. Bukai, 47, was lucky to come out of Mr. Assad’s prisons alive, but more than 40 members of his family died in 2012 in a bombing of their neighborhood in Judaydat Artuz, a Damascus suburb. That he managed to survive and, eventually, escape from Syria was a tribute to the determination of his wife, Abir Jassoumeh. Both times he was arrested she searched until she found him, 10 days the first time, 20 days the second. She then bribed officials to win his freedom — more than $20,000, or around 10 times her annual income, raised with the help of siblings living abroad.

They chose to settle in this small French city because one of his brothers, a doctor, was living here. Mr. Bukai already had a connection to France — he enrolled in a bachelor’s program in Rouen in the 1990s, after studying drawing in the Syrian city of Homs and fine arts in Damascus.

He had a comfortable if unremarkable upbringing, at least until the Arab Spring. His father, who worked in an oil refinery in Homs, was secular and not politically engaged. But many of his relatives opposed the country’s autocratic rulers, Hafez al-Assad and the current president, Bashar al-Assad, and were among the first to join the peaceful proteststhat broke out in 2011. In the first protest in Judaydat Artuz, 15 of the 25 participants were members of the Bukai family.

Mr. Bukai firmly believed that freedom and democratic values would prevail. He filmed videos of the protests and posted them on the internet. He thought the government’s days were numbered.

“When we saw that international forces took down Qaddafi, we thought ‘This is our chance to make the Assads fall,’” he said, referring to the NATO bombing of Libya in 2011 and the Libyan leader, Col. Muammar el-Qaddafi. They expected a similarly rapid end for Mr. Assad: “We never thought he would butcher Syrians without anyone budging. We knew that maybe a few hundred would die, but it was a small cost for our freedom.”

So Mr. Bukai stayed in Syria even though he knew he risked arrest. The police had searched and burned his mother’s house in 2012. Still, he lived with the family until the police caught up with him.

“I was always scared,” Ms. Jassoumeh said. “But even when I asked him to stop, he wouldn’t.”

His first arrest came in July 2012 as he was commuting to work at the International University for Science and Technology in Damascus, where he was teaching art. He made the mistake of staying on his bus as it went through one of the many checkpoints that appeared in Damascus as the civil war was heating up.

The guards found his name of a list of wanted people. They made him get off the bus, called him a traitor, handcuffed him, blindfolded him with his own shirt and took him to a detention center. There he was beaten so badly that he suffered multiple broken bones and temporary hearing loss. His wrists still bear scars from that day, and he says he still hears the screams of the other prisoners.

Ms. Jassoumeh paid about $1,000 to get him out of jail, but the charges remained. He then spent two years in hiding. In 2014, he and his family decided to make their escape from Syria. They bribed someone to have his name omitted from a watch list at the border, then dressed as Christians, wearing crosses. But they had been betrayed: Mr. Bukai’s name was still on the list. He was arrested and taken back to the same detention center — facility number 227.

By this time, the abuses had reached new levels of depravity, and the prisoners were forced to watch and participate in the torture. Once again, Ms. Jassoumeh paid a bribe, this time $6,000, to have her husband transferred after 70 days to a jail where he was not tortured and was allowed family visits.

“I am lucky. I love life. I am attached to life,” Mr. Bukai said about how he got through the ordeal. “I had a big hope of getting out and of seeing my wife and my daughter again.”

His wife traveled every week to see him, crossing war zones 38 times to give him the courage, he says, to stay alive. After she paid a final bribe, he was released from jail, and in October 2015, certain that his name had been removed from the wanted list, they left Syria for good, carrying the few drawings he had done in the jail and musical instruments to attract the custom officers’ attention away from the art. When they made it to Lebanon, they immediately requested asylum at the French Embassy in Beirut.

Today, they are slowly trying to build a life abroad. But they still hope to return to Syria one day after the toppling of the Assad government. Until then, Mr. Bukai will keep sketching.

“It is a personal therapy that allows me to evacuate,” he said about his work. “The whole time I was in hell, I tried to not see nightmares. Instead, I forced myself to see beautiful dreams.”

Haunted by Memories of Syrian Torture, Saved by Art