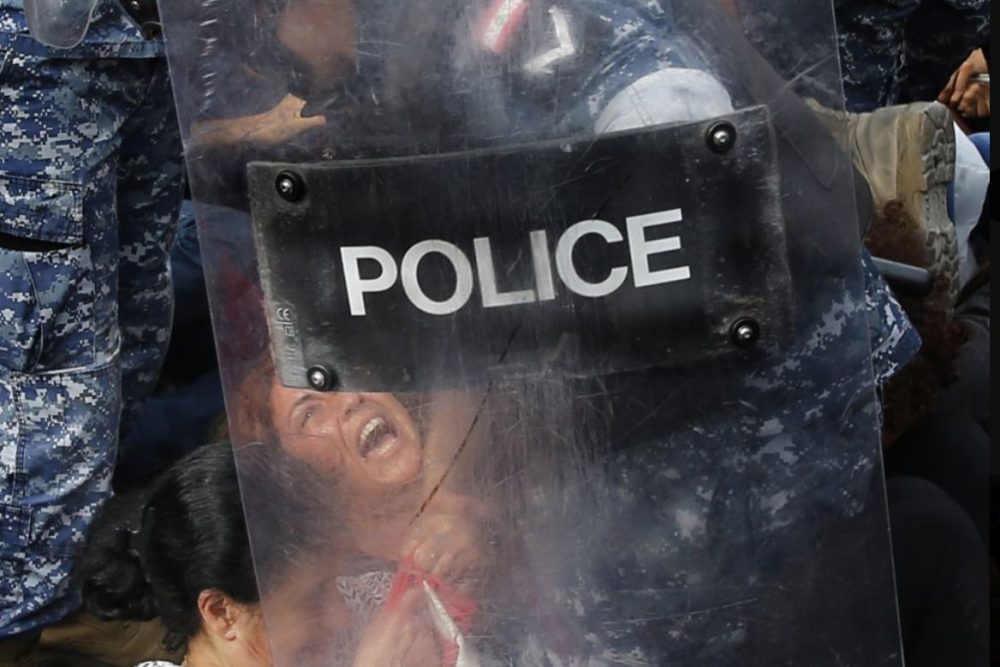 October 27, 2019 8:14 am 0
Trump Should Protect the US Embassy in Lebanon
Hariri Squeezes Terrorist Hezbollah That Killed His Father
“This Is Lebanon, Not Iran” Protesters Are Chanting

Lebanese anti-government protesters stepped up their efforts to block roads in and around the capital Beirut on Saturday, lying in the streets and chanting “peaceful, peaceful” as security forces struggled to drag them out of the way. Lebanese demonstrators call their protests a revolution.

The dispersals were largely peaceful, but clashes broke out near the northern city of Tripoli, injuring a number of people. The campaign of civil disobedience came on the 10th day of nationwide anti-government protests, the largest Lebanon has seen in years.

Rima, a 29-year-old who was manning one of the roadblocks in central Beirut, allowing in ambulances and motorcyclists, said:

This is an uprising of a people who have been suffering for the last 30 years and can no longer tolerate their lies, theft and hypocrisy.

She declined to give her full name for security reasons.

The rallies have paralyzed a country already grappling with a severe fiscal crisis that demonstrators blame on political elites who have ruled since the end of the 1975-1990 civil war. Banks, universities and schools have been closed since last week.

Saturday’s attempts by demonstrators to step up resistance appeared to be in defiance of calls to open the roads — the protesters’ main pressure point on the government to respond to demands for major changes.

The demonstrations were sparked by proposals for new taxes, including one on WhatsApp voice calls and messaging services that came on the heels of recently passed austerity measures. They soon escalated into a call for the overthrow of the post-civil war political establishment, seen by many as corrupt and incompetent.

Now, some protesters are calling for early parliamentary elections and a new, smaller Cabinet and have rejected economic reforms proposed by the current prime minister.

George, a civil engineer who also declined to give his last name for fear of retaliation by terrorist Hezbollah, said:

In Beirut, there was some pushing, shoving and screaming as riot police tried to drag protesters away by the arms and legs. There were no reports of arrests or injuries. On one road, an armored personnel carrier came within several meters (yards) of a group of protesters lying in the road before turning back.

Near Tripoli in northern Lebanon, the army said it intervened after a group of people began fighting with protesters who had blocked a road. It said five soldiers were wounded by stones and fire bombs, and that the soldiers responded by shooting in the air and firing rubber bullets, wounding “a number” of people. The army didn’t elaborate. Videos posted online showed large numbers of people running through the streets, some hurt, as soldiers chased them while gunfire can be heard. It was a rare case of the army interfering to remove the road blocks.

On one major thoroughfare in downtown Beirut, security forces and protesters engaged in a cat and mouse game. After security forces dragged the protesters off the asphalt, the demonstrators returned to present them with flowers. Then they sat in the road, blocking a main route between the city’s east and west.

BRING DOWN THE REGIME

“The people want to bring down the regime,” the protesters chanted, reprising the main slogan of the Arab Spring uprisings that swept the Middle East in 2011.

“We are not bandits,” one man cried as demonstrators were being dragged away. “We have rights and are asking for them.”

On the coastal highway north of Beirut, a large crowd of residents sat on the ground as others stood in a line as a military bulldozer approached, forcing it to turn back. To the south, Lebanese soldiers removed chairs and tents set up in the middle of an intersection linking Beirut to the presidential palace on a hill overlooking the city.

In each incident security forces appeared reluctant to forcibly confront the protesters. But Hezbollah’s criticism of the demonstrations raised concerns about a possible backlash.

The demonstrations have brought together Lebanese from various religious sects and political affiliations, with many protesters directing their anger at their own representatives. Chanting “all means all,” the protesters have simultaneously indicted the entire political system and tried to head off any sectarianism.

On Friday, the military warned that blocking roads was a violation of the law. The leader of the Hezbollah, the most powerful armed force in the country, called on the protesters to open the roads and ordered his supporters to leave the rallies after they brawled with rival protesters.

In a speech Friday, Hezbollah leader Hassan Nasrallah cast doubt on the spontaneous nature of the protests. Once again, he claimed foreign powers and rival political groups were exploiting the rallies to go after his group. Hezbollah’s loyalty is to Iran, not Lebanon.

Amnesty International, meanwhile, said that blocking the roads a way for the protesters to make their voices heard and called on authorities to protect the rallies against violence from political opponents.

Later on Saturday, in one of the main demonstrations in Beirut, protesters chanted: “We aren’t afraid of the sectarian leaders.”