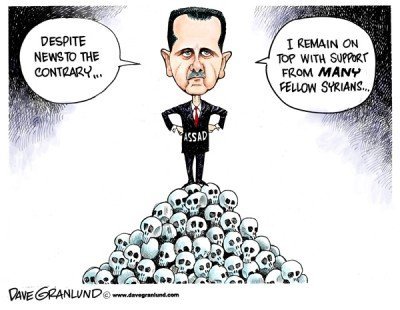 Kill Animal Assad, Russia Will Replace Him, Not the Islamists

April 10, 2018 8:41 pm 0
To Truly Weaken Iran the United States Must Assassinate Assad
I would rather vote for a gorilla than for Assad
Bravo Nadia Murad. Hey Nobel, What About Assad Sexual Crimes?

It behooves the Trump Administration to consider an option that may have skipped its scrutiny. Kill animal Assad. Do not worry, Russia will replace him with another Alawite. The Islamists will have no say in the matter.

A new Syrian puppet to replace the dead Baschar al-Assad may be less prone to Iranian influence. He/she may learn their lessons from the death of Assad, which means they will refrain from poison gas attacks on their own people in the future.

For those who think this is illegal, we beg to disagree. It is our moral responsibility to eradicate violence lest we think going after Hitler was also illegal.

It’s a novel idea worth examining because no one who will replace him will be worse than Assad. And because the Islamists will be unable to wrestle that power from Putin’s hands.

A dead Assad might even create diplomatic opportunities for a sensible solution in Syria.

Once Putin realizes his terrorist agent is gone, he may consider his losses from a totally different cost-benefit analysis prism. As long as Assad is alive, Putin has no choice but to continue his policies of supporting him. Others are watching how Putin treats Russia’s friends. Without Assad, Putin can’t worry too much as who is watching and what Russia’s reputation might become.

Assad’s replacement will not be some wild-eye Islamist with grand schemes to threaten the west. Putin will make sure the new leader is another puppet. One that no longer threatens his people, or others, with chemical weapons.

It’s time to kill animal Assad to teach Putin a lesson as well. Let him dig deep to find his replacement. Let him suffer to maintain law and order once Assad is gone. Burden the thug with more than he can handle. It might just be the medicine to temper his poison gas attacks as well.

Kill Animal Assad, Russia Will Replace Him, Not the Islamists