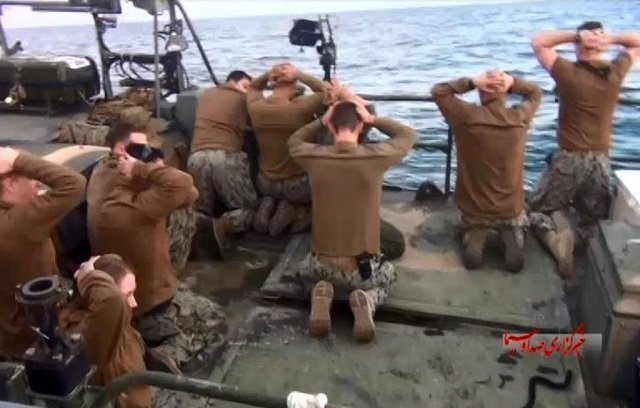 Khamenei: God delivered US sailors into our hands

Source: The Times of Israel (Khamenei: God delivered US sailors into our hands)

Iran’s supreme leader said God delivered US sailors into our hands to our country’s naval forces.

Meeting with the Iranian Revolutionary Guards Corps (IRGC) Navy unit that took 10 US sailors captive when they strayed into Iranian waters on January 12, Ayatollah Ali Khamenei hailed the “courage” and “strong faith” of the unit, semi-state Iranian news site Fars reported on Sunday.

“You did an excellent job,” Khamenei told them. “Certainly, it was the divine job that sent the Americans straying into our territorial waters only to be promptly captured with their hands behind their heads.”

Iranian political and military leaders have repeatedly castigated the US over the incident, gloating about ostensible American panic, cowardice and lack of professionalism. The incident coincided with the lifting of international sanctions on Iran in the wake of last summer’s nuclear deal, but Khamenei and other senior Iranian figures have repeatedly emphasized that the deal does not mark a warming of Iran’s attitude to the United States. On Saturday, at a meeting with the visiting Chinese President Xi Jinping, Khamenei remarked: “Americans pursue such (a) dishonest approach to all issues.”

The commander of Iran’s air defense forces said last week that US forces in the Persian Gulf scrambled jets over Farsi Island after the IRGC unit captured the sailors there, but retreated when they were threatened with a forceful response.

And on January 16, a top Iranian general boasted that the sailors briefly held by the Islamic Republic were “crying” as they were taken in by his nation’s naval forces.

Brigadier General Hossein Salami, deputy commander of the IRGC, said “the marines were crying when they were being captured, but they later felt better after the IRGC forces treated them with kindness.”

Tehran released the 10 sailors on January 13, a day after it seized their two small ships when they drifted into Iranian-controlled waters. “Their boats were equipped with 50-mm caliber machine guns and other light and semi-heavy weapons,” Fars reported Sunday, adding: “Many regional analysts have also praised the IRGC’s brave reaction to the US aggression.

“The Americans humbly admitted our might and power, and we freed the marines after being assured that they had entered the Iranian waters unintentionally, and we even returned their weapons,” Salami also said.

The IRGC’s naval commander said his forces had their missiles locked on a US aircraft carrier in the Persian Gulf as the incident unfolded, and were awaiting orders to fire. General Ali Fadavi scoffed at the “unprofessional behavior” of the US fleet during the crisis, warned that Iran could have inflicted an unprecedented “catastrophe” upon the US forces, and bragged that the US would never prevail in a confrontation with Iran in the Gulf.

Khamenei: God delivered US sailors into our hands