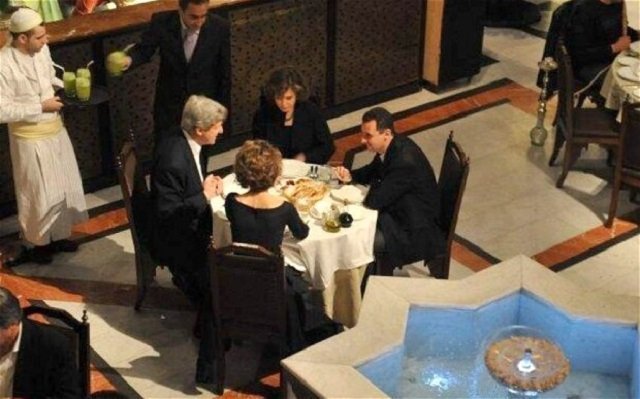 Kerry Saved Genocidal Assad. What Does That Make Him?

July 18, 2015 8:19 pm 0
Obama is But a Charismatic Community Organizer
Syria to the US is what the Berlin Wall was to the Soviet Union
Who is funding terror?

John Kerry loves the Assads. He befriended Hafez al-Assad long ago and followed with the tradition by protecting and befriending his son the mass murderer Baschar al-Assad who has killed hundreds of thousands of Syrians.

With the Iran deal, Kerry saved genocidal Assad. What does that make him? An accomplice in Assad’s crimes against humanity or a possible recipient of a Nobel Peace Prize bought for with the bloods of innocent women and children.

If the Nobel Peace Committee awards him its coveted prize, other Nobel Laureates should forfeit their prize by sending it back to Oslo. Indeed, it would be an infamous day in the history of civilization if Norway celebrates a man who helped a mass killer survive to kill some more.

There is no other way to interpret what John Kerry has done with his Iran deal whose aim is to launch Iran to kill and destroy at will.

How could launching a nation, which oxygenates itself by terrorizing other nations, be interpreted as anything but committing Genocides? How could John Kerry live with himself knowing his friend Baschar al-Assad is about to kill more innocent women and children? How could Kerry justify these murders to his own children?

There has never been any worse Secretary of State than John Kerry. The man’s ideology betrays the very same country that gave him life and happiness. Kerry betrayed America with his Iran deal, and historians will, when Iran begins its mass expansion into the region, record that John Kerry facilitated the creation of so many genocidal killing fields in the Middle East.

Kerry saved genocidal Assad while he pretended to be against his rule. Just like Obama pretended he is a friend of Israel.

Let us start a petition to be dispatched to the Nobel Peace Committee in Oslo asking the Committee to ignore John Kerry because his Iran deal helped expand and increase violence in the region.

Let us stop John Kerry from further damage to U.S. interests. Let us stop him from facilitating the killing of innocent women and children in Syria.

Kerry Saved Genocidal Assad. What Does That Make Him?