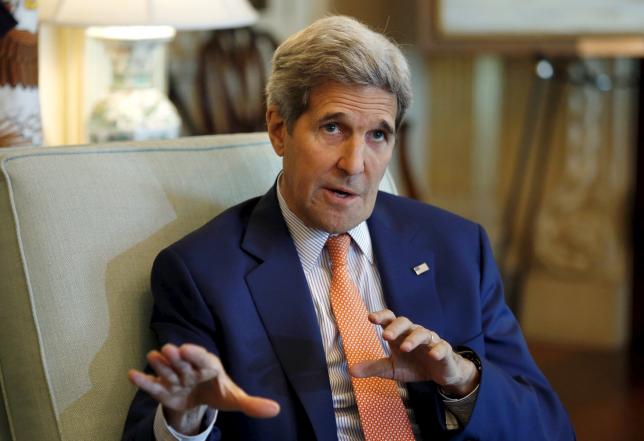 U.S. Secretary of State John Kerry said a speech by Iranian Supreme Leader Ali Khamenei on Saturday vowing to defy American policies in the region despite a deal with world powers over Tehran’s nuclear program was “very disturbing”.

“I don’t know how to interpret it at this point in time, except to take it at face value, that that’s his policy,” he said in the interview with Saudi-owned Al Arabiya television, parts of which the network quoted on Tuesday.

“But I do know that often comments are made publicly and things can evolve that are different. If it is the policy, it’s very disturbing, it’s very troubling,” he added.

Is Kerry surprised Iran is our enemy? How many effigies, flags, and chants “Death to America” must Khamenei concoct to grasp Iranian enmity towards America? How many threats must Israel receive before Kerry decides Iran is serious about them? How many wars must Iran start in the region for Kerry not to be surprised anymore?

Ayatollah Khamenei told supporters on Saturday that U.S. policies in the region were “180 degrees” opposed to Iran’s, at a speech in a Tehran mosque punctuated by chants of “Death to America” and “Death to Israel”.

“Even after this deal our policy toward the arrogant U.S. will not change,” Khamenei said.

Is Kerry surprised Khamenei said what he said? If so, either he is playing us for dumb or our Secretary has been hibernating since 1979.

Kerry said the U.S. believed its Arab allies had the ability to confront Iranian interference in the region.

“I think President Obama’s belief and our military assessments, our intelligence assessments, are that if they organize themselves correctly, all of the Arab states have an untapped potential that is very, very significant to be able to push back against any of these activities,” he said.

With this statement, Kerry admitted Iran deal would start new wars if Arabs are supposed to push back against a new more terror-invigorated Iran.

The arms race is on.

Natural Born Women Killers in Islam
When EU and US Companies Break Laws
Why worry when Assad and Abdullah agree?
Iranian Terror 594