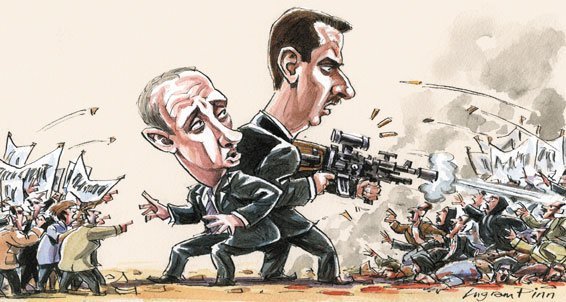 When the West Point Combating Terrorism Center published in 2006 the full interviews conducted by US troops on captured Syrians operating in Iraq, it learned the hard truth about the Assad machine of terror. Their confessions traced back the al-Qaeda terror to the Assad regime?s own training, funding, and arming of Sunni Muslims to kill our US soldiers in Iraq.

This exposure to the proxy wars Iran and Syria were engaged in have become standard operating procedures for Assad and Khamenei because of their success in Iraq and the lack of any meaningful response by the US.

Iran, today, is waging a proxy war against Israel using some appalling tactics to kill as many Arab civilians as possible. While the Iranian regime claims to be conducting peaceful negotiations with the P5+1 nations, the Mullahs are also using Hamas as a proxy to wage wars against our strongest US ally. Dare we ask what this means? Not in today?s political environment fogging the brains of our elected officials in Washington.

Seriously, what does it mean to wage a proxy war? It means you hide your real agenda behind other terrorists and combatants clueless about their role and driven by a craving for revenge. For Iran to use Sunni Muslims to kill Jews, while it pretends it is negotiating for peace, is the closest thing to experiencing heaven.

It also means that to wage the war Hamas has started and which it cannot possibly win, Iran must press those buttons most likely to harm Israel amongst its friends in the West. Placing missiles and rockets in UN schools was no accident. Iran wants to kill as many Sunni civilians in Gaza the same way it killed thousands of Sunni civilians in Syria. Do we really think Israelis will let themselves, deliberately and intentionally, fall in this trap? Anyone accusing Israel of killing civilians has no clue about what is going on.

Similarly, Iran also wants to use the tunnels it knows Israeli soldiers would be looking for as a magnet to trap them for a high kill ratio.

Iran?s tactics are concentrating on Sunnis killing Jews and Jews killing Sunnis. Yet, the world seems to miss the big picture because, even though Iran is using UN schools to terrorize civilians, some in the UN cannot help but direct their anger at Israel because of their inherent bias and prejudices. Some in the UN hate Israel more than Hamas does.

In the meanwhile, Hamas is also showing the world why we must unite behind eradicating the ideology of the Muslim Brotherhood. No country or system of governance can afford to expose itself to the likes of Hamas. We have seen their cousins in Egypt, who suffer from no protective siege on illegal materials, display the same degenerate need to express their politics with terror threats.

The Gaza war Hamas is waging today is just another proxy war the regimes of Khamenei and Assad are conducting against Israel with the help of the Emir of Qatar. My estimation is that after Israel, Iran will turn on Jordan with similar tactics using al-Qaeda or ISIS operatives to ignite another regional war.

The UN, in the meantime, is using the trouble Iran is causing to expand its operations and to raise more funds. As far as its leadership is concerned, to limit the harm of Assad and Khamenei by pointing the finger at their proxy wars is to kill the golden goose. However, pointing the finger at Israel means more petrodollars.

Obama, on the other hand, is helping the terrorists by not existing.