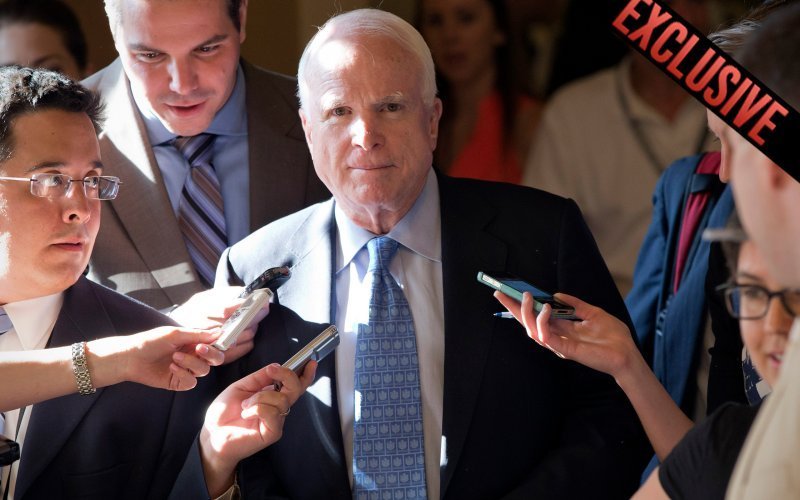 Source: The Daily Beast – by Josh Rogin (John McCain on His Meeting With Obama, Middle East Tour, and Syria)

The president met with his 2008 rival Thursday for their most in-depth meeting in years. The senator tells Josh Rogin about Obama’s plans for Syria – and the region’s frustration with U.S. inaction on the war.

Following his role in avoiding a nuclear war over filibuster reform, Sen. John McCain was invited with his friend Sen. Lindsey Graham to meet with President Obama in the White House on Thursday to talk about foreign policy, the most in-depth meeting in years between Obama and his fiercest critics on the issue.

McCain sat down with The Daily Beast on Friday for a long interview about his White House meeting and his multicountry tour around the Middle East earlier this month, which included stops in Israel, Turkey, Qatar, Iraq, and Afghanistan. The Obama meeting lasted two hours, and attendees included Vice President Joe Biden and new National Security Adviser Susan Rice, although Obama did most of the talking on the administration side.

“The president’s invitation indicates that the president realizes that there is a very serious implosion of events ranging from across northern Africa and well into the Middle East,” McCain said. “He gave us many of his views, and we exchanged thoughts on these various situations.”

Obama told the senators he was examining new options not only in Syria, but also in other parts of the Middle East, including Egypt.

“I don’t know if I changed his mind on anything, but it was very clear that he is at least examining other options,” McCain said. “That doesn’t mean he has adopted a change in policy or made a momentous decision to do what we want him to do.”

A large part of the conversation focused on the war in Syria, where McCain has been advocating for a U.S.-led no-fly zone and targeted airstrikes to degrade President Bashar al-Assad’s airpower.

“It’s very clear that he sees that events are going in the wrong direction in Syria. He is examining all the other options that are available,” McCain said.

The senator’s frustration over the administration’s action on those options spilled out into the open Thursday. He publicly declared that he would hold up the renomination of Joint Chiefs of Staff Chairman Gen. Martin Dempsey after Dempsey refused to say which options for Syria he supports or doesn’t support, such as a no-fly zone or targeted airstrikes.

On Friday McCain told The Daily Beast he would offer Dempsey the chance to respond in writing to the questions the general refused to answer in the open hearing—a way to deescalate the feud between the two officials. McCain sent a letter Friday afternoon to Dempsey with Sen. Carl Levin with a list of questions on Syria and Afghanistan.

“That’s been resolved. They got the votes for it,” he said. “But the fact that it was held up is a symptom of two things: one, there is a reluctance in Congress and among the American people because of Iraq and Afghanistan, and two, they had no plan, so there was a suspicion that if everything failed, they would say, ‘Well, we had the agreement of Congress to do this.’”

Still, the administration’s current plan to give the Syria rebels some light arms will not change the battlefield equation, McCain said.

“One of two things will inevitably happen. Either we get engaged and we turn this around, or Assad is able to reassert control to the point where [the administration will] make up the excuse that we can’t salvage this situation anyway,” he said. “I don’t know which result it’s going to be, but I do know with the status quo that the initiative will continue to remain with Assad.”

McCain said he also had heard that the Obama administration was urging the French government not to transfer some advanced weaponry to the Syrian rebels, such as shoulder-fired surface-to-air missile launchers. “Disgraceful,” he said.

Traveling around the region, McCain said he found widespread confusion and lament among regional leaders about the Obama administration’s Syria policy, and most leaders called on the U.S. to develop a clearer strategy and publicly announce what it intends to do.

In Qatar, McCain met with the new 33-year-old Emir Sheik Tamim bin Hamad bin Khalifa al-Thani, whose country has been funding and arming the Syrian opposition, including some of the more extremist elements. The emir told McCain that they were now shifting their strategy, the senator said.

“He said in the previous three weeks that they had changed the process of how they get weapons to the resistance,” McCain said. “I assumed that means working with the Americans to get the weapons to the right people. They have felt the sting of the criticism.”

In Israel, McCain met with Prime Minister Benjamin Netanyahu, who struck targets inside Syria earlier this month for the fourth time.

“Bibi is very concerned about the situation in Syria and the spillover into Israel. He’s had to launch strikes four times into Syria, and I think he sees Syria as an existential problem for Israel,” McCain said.

In Turkey, the senator met with Prime Minister Recep Tayyip Erdogan, who McCain said was waiting for the Obama administration to make a decision on the way forward in Syria.

“They don’t know what America wants to do, and frankly, neither do I,” McCain said.

The Mother of All Stalemates in Syrian Civil War
Who is funding terror?
The “Fill the Blanks” President
Slippery Barack Obama 976