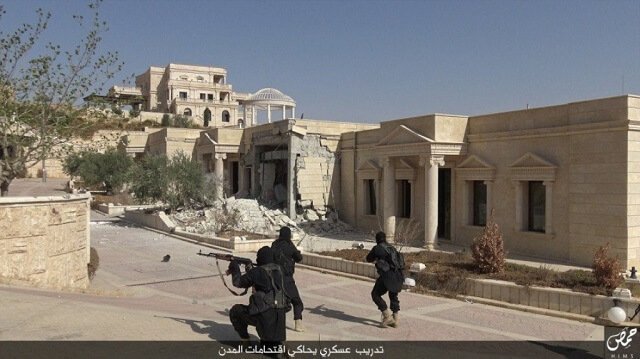 TFS Note: Many people around the world do not realize that if Assad stays in power, jihadists will only increase in number. The spigot comes from 350 million Arab Sunnis, and there is not stopping it. This is the kind of training that eventually defeated the Soviets in Afghanistan and their spigot was less 11.26 million Afghanis (1986). Sunnis fighting Shiite Iran are digging-in for the long haul.

Both jihadist groups have released propaganda on social media sites over the past several days that show their personnel drilling in urban warfare tactics. The Islamic State is training its forces inside a city under its control, while Al Nusrah is instructing fighters near the contested city of Aleppo.

The Islamic State showcased jihadists training inside the ancient city of Palmyra (or Tadmur in Arabic) in the Homs desert. The fighters can be seen infiltrating a segment of the city before they practice how to effectively navigate the streets in combat. The trainees use light-machine guns, technicals, and rocket-propelled grenades (RPG’s) as cover fire for during these exercises

Al Nusrah released a video from its Sayfullah Shishani Battalion that shows its fighters training for urban warfare inside buildings in Aleppo Province. The Sayfullah Shishani Battalion includes a large number of fighters from the Caucasus as well as other Russian-speaking militants, and it is named after Sayfullah Shishani, a Chechen military commander within Al Nusrah who was killed fighting in Aleppo with the Battalion early last year. The footage shows the group’s new leader, an ethnic Uzbek, speaking to trainees before they learn how to clear buildings. The Arabic and Russian language video also highlights the use of a US-made M240 light machine gun, which was likely obtained by Al Nusrah from fighting with US-backed rebel groups in the area.

Since the beginning of 2012, a total of 139 camps have been identified as being operational inside Iraq and Syria at one point in time. Of those, 102 have been found in Syria, and 37 in Iraq; 17 are used to indoctrinate and train children.

Some of the jihadist training facilities may no longer be in operation due to changes in fortunes on the battlefield (lost territory, airstrikes, etc.). At least 16 are thought to be closed and 15 to 22 have been hit in Coalition airstrikes. It is unclear if these camps have been destroyed or if they reopened in the same location or elsewhere. It is also very likely that there are training sites that have not been advertised.

Since June 21, The Long War Journal has identified 22 new training camps. Of these, 17 are located in Syria while the other 5 are in Iraq. Ten of these camps were identified as being run by the Islamic State, with an additional camp operated by the pro-Islamic State Liwa Shuhada al Yarmouk group in southern Syria. Three were identified as Al Nusrah Front facilities, including one camp for children run by the Saudi al Qaeda cleric Abdullah al Muhaysini. Four camps are managed by Ahrar al Sham, while the Turkistan Islamic Party and Harakat Fajr al Sham al Islamiyya each operate one. Two camps that were run by Katibat al Tawhid wal Jihad and the Crimean Jamaat have statuses that are unclear, as both of these organizations have since joined Al Nusrah.

The Islamic State has operated 68 camps in the region (35 in Iraq, 33 in Syria). The Al Nusrah Front has operated 26 camps inside Syria. Allied jihadist groups have run 45 other camps (43 in Syria and two in Iraq); 12 of those camps are managed by jihadist groups from the Caucasus, five by Uzbek jihadist groups, three by ethnic Uighurs, and jihadists from Gaza, Morocco, and Kazakhstan each run one camp.

In the past, al Qaeda has used its network of training facilities to instruct fighters to battle in local insurgencies, identify potential recruits for attacks against the West, and support a host of allied jihadist groups. The threat of urban warfare training was illustrated by the Charlie Hebdo attacks earlier this year in Paris. The two gunmen, who were later discovered to have ties to al Qaeda in the Arabian Peninsula, displayed professional training during the attack.