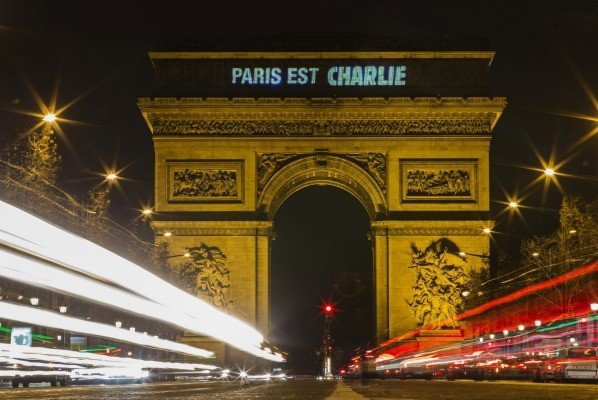 Cold War stability conformed to a game of cloak and dagger where the craftiness of our enemy’s mind was the biggest danger. Today, we are facing instability subject to vests and swords where the cruelty and intolerance of Islam is our biggest danger. Neither the rules, nor the goals are the same, and if we do not adapt by shedding political and religious correctness, we, moderate Muslims and the rest of the world, are doomed.

When the Al-Qaeda terrorists attacked the Charlie Hebdo in Paris, simultaneous to that attack was another perpetrated against a French-Jewish owned supermarket called Hyper Cacher. Four days later, on January 11, forty world leaders marched for peace in Paris. Three million Europeans joined them all condemning heinous religious acts of terror.

From this carnage rose the three words ” Paris Est Charlie “, which later emblazoned the Arc De Triomphe; but also from the massacre at Hyper Cacher rose another three words, “ Je Suis Juif ”.

Every French Jew chanted both, but not every French or European chanted “ Je Suis Juif ”. Jews of all people know and feel what it means to exist in constant fear of terror. “ Je Suis Charlie ” was their way to tell the rest of Europe they understood what just happened, “ Je Suis Juif ” was their way to ask the rest of the world to join the Jewish communities in their plight suffering from incessant terror. Such did not happen. This is our shame to live with.

In the same spirit, impoverished and helpless Syrians who experienced, first-hand, the Assad terror and that of ISIS are chanting silently today, “ Je Suis Free Syrian Army ”. Like “ Je Suis Juif ” was ignored, so is their own painful chant.

Uniting against terror begins by uniting with those experiencing the most terror. President Hollande missed an excellent opportunity not to deliver a speech on prime TV on this subject. How can we defeat this scourge if we do not merge as one people to defend against it?

Many Israelis, in our hour of need, supported the Syrian Uprising and the demise of the Assad regime of terror. Syrians, in their hour of need, must stand by all the Jews as they stood by us and as we all are standing by France and the rest of Europe today.

The multi-terror apparatuses emanating from the Middle East are relentless, uncontrollable. Bar Barack Obama who cannot bring himself to admit of its existence, any Western politician who believes he/she can tame, co-exist with, or simply ignore terror is learning fast it could strike closer to home than previously anticipated. Terror, by Muslim extremists and terror-sponsored countries like Syria and Iran, is an international pestilence, not a local or a regional one. It is certainly not one to play with or assist (As Assad has done with ISIS), or one to bed as a political convenience. Terror has a way of haunting its backers.

Furthermore, stop uttering “The enemy of my enemy is my friend” nonsense. This principle is feeding terror because it justifies for any country to support one terror group against another. How about “They are all my enemies until they prove they are my friend”. This is a far better principle to protect our interests from a chaotic and violent Middle East.

The next few months are crucial to rally the public opinion to fight Islamic extremism and state-sponsors of terror. Those leaders who believe pointing the finger at the radicals also means pointing the finger at Islam should better test where the wind is blowing. Watching the rally in Paris, the public, curve-wise, seems to be ahead of their own politicians.

Moreover, I believe the Jewish global communities should come together to form a new Social Media Initiative to better combat Antisemitism and to take advantage of the next “ Je Suis Charlie / Je Suis Juif ” to tie the effect of terror unto the daily Jewish life in ways more people around the globe would relate to with their own lives. Opportunities are being missed.

There is no reason why “ Je Suis Juif ” should not become the symbol of unity against terror worldwide.

Sheldon Adelson, it is your turn. This will be the most important achievement of your life. Antisemitism is stoppable and determined Social Media campaigns to eradicate it is the conduit for such a worthy cause.