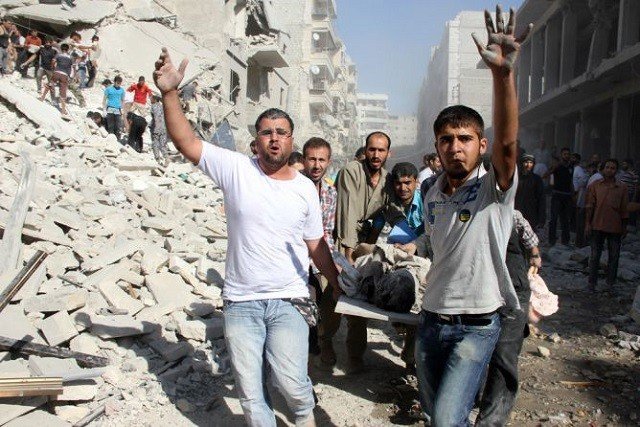 September 29, 2014 9:39 am 0
Two Reasons Why the West is Not Acting on Syria
Every Syrian is a Simon Wiesenthal In-Waiting
Choosing one’s wars

A story published by Reuters claims that the US struck grain silos killing civilians and causing conditions similar to the ones the Assad regime has employed to starve the Syrian people.

The aircraft may have mistaken the mills and grain storage areas in the northern Syrian town of Manbij for an Islamic State base… There was no immediate comment from Washington.

It is unconscionable to strike grain silos in northern Syria that are feeding thousands if not hundreds of thousands of civilians.

It is unforgivable to make such a mistake by our intelligence on the ground. One must err on the side of caution because stories like these turn every Arab against the US and against all those allies participating in the air campaign. It is the last thing this administration should wish for considering the disastrous mistakes it is already committing by striking ISIL without striking the tyranny and terror of Assad.

Meanwhile, the Assad regime continues its terror campaigns against civilians emboldened by the lack of accountability by the international community.

How many more mistakes do we have to accept from an incompetent US Administration unable to conduct a steady and logical foreign policy?

How much more damage, that threaten US national security, Obama must be allowed before US Congress react?

How many more civilians must die in Syria before the international community is satisfied it is enough?

More people are tilting towards ISIL and Nusra every day because of Obama’s not-so-smart foreign policy.

Are we to assume this is Obama’s war on American exceptionalism?

Are we to assume Obama intends to leave behind a trail of mistakes to curb America’s leadership in the world?

How else can one explain his stubbornness in the face of his selective terror pounding now to include the starving of civilians?

Shame on you Barack Obama; you were never fit to be our Commander-in-Chief, and every day you demonstrate this fact abundantly.

When Peace is Worse Than War
Are We Inventing Intelligence Now?
Russian Policy of Raping Muslim Women
Slippery Barack Obama 976 Things That Matter 382