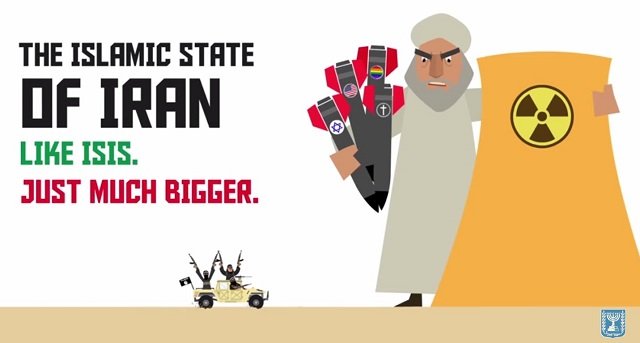 July 1, 2015 12:34 pm 0
The Junior Varsity Team in the White House
ARABS MUST DECIDE
Follow the Money of Iran Deal by Following Valerie Jarrett

Israel’s fight against Iran climbed a notch in its campaign opposing the impending deal on Iran’s nuclear program, with an animated video comparing the Islamic republic to the Islamic State group (See video below or link here).

“The Islamic state of Iran — like ISIS. Just much bigger,” is the title and punchline of the cartoon clip posted on Tuesday on Prime Minister Benjamin Netanyahu’s official Twitter account.

The 27-second video was released hours before the original June 30 deadline for the accord between Iran and the so-called P5+1 powers — the United States, Britain, China, France and Russia plus Germany, which was ultimately extended to July 7.

It shows a jeep with a black IS flag carrying three members dressed in black and waving assault rifles while running over a line of orange jumpsuit-clad prisoners representing the U.S., Christians, gay rights, and Israel.

“Islamic State sweeps through the Middle East, killing anyone who isn’t exactly like them,” a narrator says.

“Well, maybe it’s not that hard to imagine,” he says, over an image of the cleric holding missiles while hugging a nuclear reactor. This campaign shows that Israel’s fight against Iranian terror will not be abated just because President Obama is trying to sign a deal with Iran.

Netanyahu has repeatedly said that the deal being forged with world powers could leave Iran with the ability to develop nuclear weapons, and he has not ruled out the use of military force to prevent it.

The Israeli premier has been using IS as a symbol of what he sees as the Iranian threat, citing on Tuesday a U.S. state department report which “confirmed (Iran) as a preeminent state sponsor of terrorism.”

Israel’s fight against Iranian terror should be celebrated by all the Arab countries.

“Why would anyone consider giving the Islamic state of Iran, which is a lot more powerful than ISIS, and acts with much greater power than ISIS, to have the additional power of nuclear weapons?” he asked, using an alternative acronym for IS.