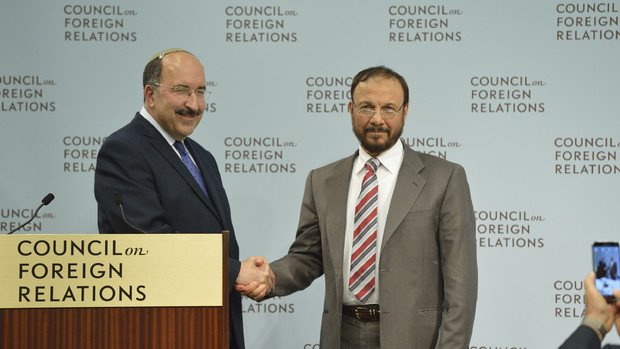 June 5, 2015 8:45 am 0
The Kurdish Cause vs. The Palestinian Cause
100 killed in week of clashes in south Syria
Mr. President, Get The Facts First On Flotilla Incident

Since the beginning of 2014, representatives from Israel and Saudi Arabia have had five secret meetings to discuss a common foe, Iran. On Thursday, the two countries came out of the closet by revealing this covert diplomacy at the Council on Foreign Relations in Washington.

Among those who follow the Middle East closely, it’s been an open secret that Israel and Saudi Arabia have a common interest in thwarting Iran. But until Thursday, actual diplomacy between the two was never officially acknowledged. Saudi Arabia still doesn’t recognize Israel’s right to exist. Israel has yet to accept a Saudi-initiated peace offer to create a Palestinian state.

It was not a typical Washington think-tank event. No questions were taken from the audience. After an introduction, there was a speech in Arabic from Anwar Majed Eshki, a retired Saudi general and ex-adviser to Prince Bandar bin Sultan, the former Saudi ambassador to the U.S. Then Dore Gold, a former Israeli ambassador to the United Nations who is slotted to be the next director general of Israel’s foreign ministry, gave a speech in English.

While these men represent countries that have been historic enemies, their message was identical: Iran is trying to take over the Middle East and it must be stopped.

Eshki was particularly alarming. He laid out a brief history of Iran since the 1979 revolution, highlighting the regime’s acts of terrorism, hostage-taking and aggression. He ended his remarks with a seven-point plan for the Middle East. Atop the list was achieving peace between Israel and the Arabs. Second came regime-change in Iran. Also on the list were greater Arab unity, the establishment of an Arab regional military force, and a call for an independent Kurdistan to be made up of territory now belonging to Iraq, Turkey and Iran.

Gold’s speech was slightly less grandiose. He, too, warned of Iran’s regional ambitions. But he didn’t call for toppling the Tehran government. “Our standing today on this stage does not mean we have resolved all the differences that our countries have shared over the years,” he said of his outreach to Saudi Arabia. “But our hope is we will be able to address them fully in the years ahead.”

It’s no coincidence that the meetings between Gold, Eshki and a few other former officials from both sides took place in the shadow of the nuclear talks among Iran, the U.S. and other major powers. Saudi Arabia and Israel are arguably the two countries most threatened by Iran’s nuclear program, but neither has a seat at the negotiations scheduled to wrap up at the end of the month.

The five bilateral meetings over the last 17 months occurred in India, Italy and the Czech Republic. One participant, Shimon Shapira, a retired Israeli general and an expert on the Lebanese militant group Hezbollah, told me: “We discovered we have the same problems and same challenges and some of the same answers.” Shapira described the problem as Iran’s activities in the region, and said both sides had discussed political and economic ways to blunt them, but wouldn’t get into any further specifics.

Eshki told me that no real cooperation would be possible until Israel’s prime minister, Benjamin Netanyahu, accepted what’s known as the Arab Peace Initiative to end the Israeli-Palestinian conflict. The plan was first shared with New York Times columnist Tom Friedman in 2002 by Saudi Arabia’s late King Abdullah, then the kingdom’s crown prince.

Israel’s quiet relationships with Gulf Arab states goes back to the 1990s and the Oslo Peace Process. Back then, some Arab countries such as Qatar allowed Israel to open trade missions. Others allowed an Israeli intelligence presence, including Abu Dhabi, the capital of the United Arab Emirates.

These ties became more focused on Iran over the last decade, as shown by documents released by WikiLeaks in 2010. A March 19, 2009, cable quoted Israel’s then-deputy director general of the foreign minister, Yacov Hadas, saying one reason for the warming of relations was that the Arabs felt Israel could advance their interests vis-a-vis Iran in Washington. “Gulf Arabs believe in Israel’s role because of their perception of Israel’s close relationship with the U.S. but also due to their sense that they can count on Israel against Iran,” the cable said.

But only now has open cooperation between Saudi Arabia and Israel become a possibility. For Gold, it represents something of a sea change. In 2003, he published a book, “Hatred’s Kingdom,” about Saudi Arabia’s role in financing terrorism and Islamic extremism. He explained Thursday that he wrote that book “at the height of the second intifada when Saudi Arabia was financing and fundraising for the murder of Israelis.” Today, Gold said, it is Iran that is primarily working with those Palestinian groups that continue to embrace terrorism.

Gold went on to say that Iran is now outfitting groups such as Hezbollah in Lebanon with precision-guided missiles, as opposed to the unguided rockets Iran has traditionally provided its allies in Lebanon. He also said Iranian Revolutionary Guard Corps forces propping up the Bashar al-Assad regime are now close to the Israeli-Syrian border.

A few years ago, it was mainly Israel that rang the alarm about Iranian expansionism in the Middle East. It is significant that now Israel is joined in this campaign by Saudi Arabia, a country that has wished for its destruction since 1948.

The two nations worry today that President Barack Obama’s efforts to make peace with Iran will embolden that regime’s aggression against them. It’s unclear whether Obama will get his nuclear deal. But either way, it may end up that his greatest diplomatic accomplishment will be that his outreach to Iran helped create the conditions for a Saudi-Israeli alliance against it.

To contact the author on this story:
Eli Lake at [email protected]