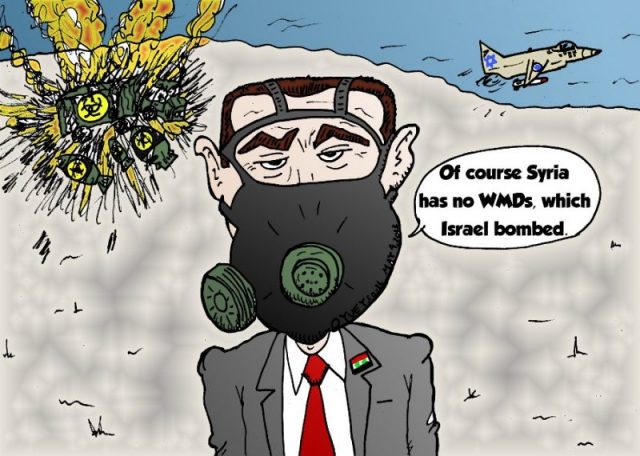 How Israeli Drumbeat is Saving Syrians

This is how the Israeli drumbeat is saving Syrians.

On March 18, the Assad float-a-balloon WMD attack on the beautiful city of Aleppo kills two dozen Syrians and injures over 100.

On March 19, the Syrian opposition demands the UN investigates the WMD attack.

On March 19, White House Press Secretary Jay Carney expressed as “Unacceptable” the use of WMD (Video). Other Obama Officials anonymously doubted the actual use of WMD in Aleppo.

During his visit, he expressed the following notion, quoting from a NY Times article:

.. if an investigation he had ordered found proof that the Syrian military had used such weapons it would be a “game changer” in American involvement in the civil war there.

(Notice the “If” in this sentence. This is the last time we will hear of this if Assad refrains from using WMD again.)

The Israelis, it is important to mention, did conclude that Assad has used chemical weapons. We believe the Israeli drumbeat about deadly WMD has persuaded Obama to re-assert his earlier claims.

Why this is important?

Assad has this habit of always testing the will of the international community with small doses of nastiness. The first use of the MIG sorties against civilians, he was met with complete silence by the US and Europe. This led to 40-50 sorties a day.

The same goes for Cluster bombs and SCUDS, which he uses whenever the need to kill more civilians demands it because the world maintains a deadly silence.

This is his second low-dose WMD attack against civilians.

All Syrians wish now is for the Israelis to expand their concerns to include also the use of Cluster bombs and SCUDS against civilians while Obama is in Israel. Assad will not hesitate to use these weapons against his enemies if he is so willing to use them against his own people.

How Israeli Drumbeat is Saving Syrians

Loading...
Newer Post
In Syria, the West is Too Late the Hero
Older Post
Obama Smokes His Own Red Line and Puffs the Smoke in Our Faces