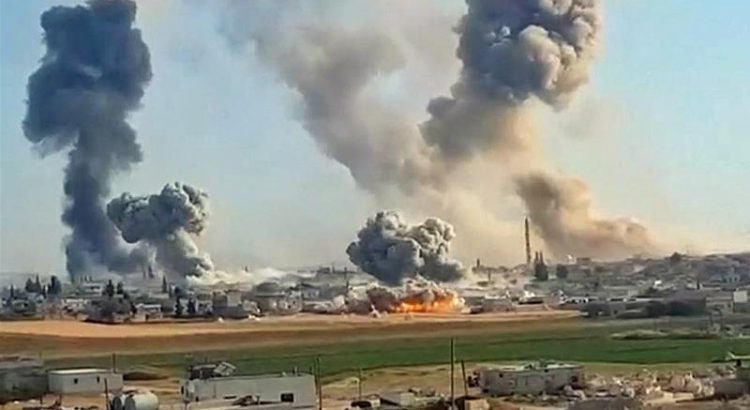 Israel is Quietly Decimating the Iranian-backed Terrorists in Syria

With two consecutive attacks over the weekend that killed two dozens militias across the border from Iraq, Israel is quietly decimating the Iranian-backed terrorists in Syria. It is picking them off to the point where some see the cost of life is not worth the pay. Like all mercenaries, they all have a breaking point and Israel seems intent on reaching it.

On Saturday, Syrian activists on the ground reported airstrikes that killed nine fighters. Followed by another attack on Sunday that killed 15 more terrorists. According to the same activist sources, the Israeli raids killed four Syrian nationals. Most likely fighting for Assad against their own people.

The nationalities of those killed on Sunday were Iraqis. Many Syrians supported the demise of Saddam Hussein in favor of democracy for Iraqis. Had they known they would be facing their terror one day, Syrians would have opposed freedom from Saddam.

The ingratitude flies in the face of decency, and Syrians now know better than to trust their neighbors to the East. Hindsight, Saddam knew what he was doing keeping most Iraqis on a short leach. The Iraqi government, no matter which corrupt prime minister the people elected, has been a source of much pain for the Syrian people as it backed the Assad killing machine and even lent it a hand.

Instead of relying on political ideology to steer the country, Iraqi politicians chose to identify with ethnicity. Their shortsightedness immediately divided Iraqis and made them an easy meal for Iran to swallow.

On the rare occasions the Assad defense downs an Israeli missile, the Assad celebrating through SANA announcements looked more pathetic than his died black hair

Over the last 200 plus Israeli attacks, the Assad regime missile defense systems proved to be useless. Having said that, the S-300 has not been fully deployed to protect against Israeli attacks. This begs the question of why. Many experts believe because the system is as inconsistent in its capacity to successfully maneuver around Israel’s air superiority that Russia deemed it too dangerous for its military sales to put on display the system’s weaknesses.

Decidedly, Assad has but aging missile defense systems to confront Israel. Their high fail rate is such that Damascus almost never mentions the results of their deployment. On the rare occasions the Assad defense downs an Israeli missile, the Assad celebrating through SANA announcements looked more pathetic than his died black hair.

As far as Iran is concerned, the Mullahs in Tehran spend all their money and energy on building offensive missiles. They rely, as well, on Russian technology to protect the regime. Just imagine how easy it would be to strike Tehran if a war broke out between the Arabs and Iran, which most likely Israel would certainly join to finish off the terrorist regime of Khamenei et al.

Not only has Assad permitted Iran to station its fighters across the country, but he also gave the Mullahs a free hand to ethnically cleanse Syrians by any means possible

Barack Obama opened the door for Iran and Russia to occupy Syria. It was a deliberate policy whose exterior skin played on the need to stop any future Iraq Wars. But its inside skin had a more sinister color and feel: For Iran to threaten Israel by proxy. The whole region is paying a dear price for Obama’s personal bias and prejudice, and it will take a very long time to correct his destructive policies for the region.

The number one goal for Israel, as well as many of the Gulf countries, is to force Iran to retreat back to Tehran. Israel is fighting the regime in Syria, and the Saudis are fighting it in Yemen. In Lebanon and Iraq, the Mullahs remain unopposed. However, Lebanon’s economic meltdown has partially clipped Hezbollah wings as it struggles to contain its weak position, and the opposition to Iranian occupation of Iraq is slowly morphing into a potent deterrent. In either case, the outcome is too early to predict.

For Syrians and Israelis, dislodging Iran from Syria is a long and arduous task. Not only has Assad permitted Iran to station its fighters across the country, but he also gave the Mullahs a free hand to ethnically cleanse Syrians by any means possible. Furthermore, Iran has established itself socially by building Mosques and medical facilities for their benefits once Sunnis converted to Shiism readily.

Iran is so entrenched in Syria at every level, it is going to take more than 200 sorties to send them back home. But the tough sanctions, and the pressure the US and Israel are applying will eventually break its resolve.

Israel is Quietly Decimating the Iranian-backed Terrorists in Syria