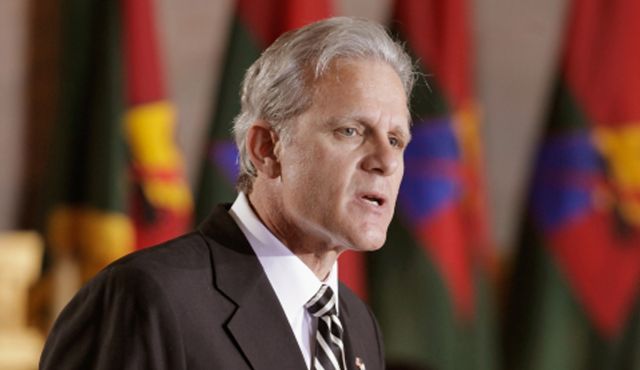 Israel discreetly helped President Obama avoid bombing Syria in 2013 after Damascus had violated his “red line” against using chemical weapons, according to a new memoir by Israel’s former ambassador to Washington, Michael Oren, to be published this month.

Oren’s book, “Ally,” discloses for the first time that in late August and early September 2013, Israel’s then-intelligence minister, Yuval Steinitz, floated a plan for Syria to relinquish its chemical weapons to the Russian government and that Prime Minister Benjamin Netanyahu received Obama’s blessing to move forward with the proposal.

To be sure, Oren also writes in his memoir that Israel did not oppose U.S. airstrikes in late August 2013, saying the Jewish state saw no downside with Obama enforcing his red line and hopefully deterring Syria’s ally, Iran. But at the same time, he credits Steinitz and Netanyahu with helping prepare the diplomacy that allowed Obama to climb down from the air strikes that Oren himself believed at the time were all but a certainty.

It was in this period that America came closest to directly entering the Syrian civil war. In August 2013, U.N. inspectors confirmed that Bashar al-Assad’s regime attacked a rebel position in Ghouta outside of Damascus. Obama reluctantly acknowledged that the Syrian dictator had crossed the administration’s red line and used chemical weapons. But after Syria and Russia agreed to a plan in which Assad would acknowledge and dispose of his chemical weapons, the threat of American airstrikes as punishment for the attack in Ghouta subsided.

At the time, the disarmament plan appeared to come about by accident. On Sept. 9 that year, Secretary of State John Kerry floated the idea that Assad could avert a U.S. attack on his territory if he gave up his chemical weapons. State Department officials soon after said the remarks were more a rhetorical flourish than a sincere proposal. But Kerry’s Russian counterpart, Sergei Lavrov, quickly seized on the remarks and presented a proposal to Syria’s foreign ministry. Within the space of a news cycle, a U.N. plan was being negotiated and America was backing away from airstrikes.

It turns out that Netanyahu was helping to bring about the deal behind the scenes, according to Oren. “In the course of this frenzy, though, I heard of a proposal to peacefully remove Syria’s chemical arsenal,” Oren writes. “The idea originated with an Israeli minister, Yuval Steinitz, who first pitched it to the Russians, who were eager to avoid an American intercession that they could not stop. Netanyahu next brought it to Obama and received a green light.”

A senior U.S. official told me Sunday that he had a different recollection of the diplomacy. This official said Obama and Russian President Vladimir Putin, as well as Kerry and Lavrov, had discussed disarming Syria’s chemical weapons long before August 2013. But the U.S. side never thought Russia was serious. This official did confirm that the Israelis quietly supported the disarmament plan and that Netanyahu discussed it with Obama, but disputed that Israel was the author of the plan.

The revelation in Oren’s memoir is particularly significant since Washington’s pro-Israel lobby, the American Israel Public Affairs Committee had agreed to help lobby for a war resolution against Syria at the request of the White House. Oren writes that Obama’s national security adviser, Susan Rice, personally asked AIPAC to lobby for the resolution and that AIPAC complied.

Oren also notes that Obama never publicly credited Israel with help on the plan. “In subsequent interviews, Obama rarely missed the chance to cite the neutralization of Syria’s chemical capabilities as an historic diplomatic achievement. Russian president Vladimir Putin also took credit for the initiative and praised this ‘vivid example of how the international community can solve the most complex disarmament and non- proliferation task.’ Israel’s role remained unmentioned, but its citizens were relieved not to have to sign up for more gas masks,” he writes.

And yet, Oren has mixed feelings about how things played out on Syria. In an interview Sunday, Oren told me, “It turned out the big winner was Assad and inadvertently Iran, who saw how Assad moved from being part of the problem to part of the solution.”

Since 2013, Assad has not only been able to use barrel bombs and chlorine against his own civilians with no threat of American direct retaliation into the war in Syria, but there is increasing evidence that he hasn’t even gotten rid of all of his chemical weapons. As my colleague Josh Rogin and I reported last month, the U.S. has been informed that residue of sarin gas was found recently at a Syrian chemical weapons facility.

More important though, Oren told me Obama sent a message to the world when he decided not to use force when Syria defied him — a message about how the U.S. would respond to nuclear infractions by Iran. “On that day the debate in Israel ended,” Oren told me.

The debate within Israel about whether Obama would keep his word, and prevent Iran from acquiring the bomb, is a theme throughout the memoir. This debate peaked in the summer of 2012 when Israel’s national security elite itself was divided on this question. Some, like Meir Dagan, a former chief of the Mossad, accused Netanyahu of endangering the country by considering striking Iran.

In his book, Oren describes one conversation that summer with Denis McDonough, who now serves as Obama’s chief of staff. Oren quotes McDonough as saying: “The bottom line is that Bibi and the president are practical men — nothing’s personal here — and nobody should delude himself that the president won’t act.”

But Netanyahu had his doubts. Throughout the summer of 2012 as Iran enriched more and more uranium to levels suitable for a bomb, Netanyahu would not promise to hold his fire. Eventually though, he relented. In his speech that September before the U.N. General Assembly, he articulated his own red line, warning Iran not to amass 250 kilograms of 20 percent-enriched uranium. He illustrated that red line with a now famous cartoon of a bomb with a fuse.

While many interpreted that speech as bellicose, the White House understood that it meant the Israelis would not be attacking Iran before the 2012 election. “Clearly Obama understood as we did that the red line speech marked not only the upper limit of Iranian enrichment, but the peak of Israel’s threatened attack on Iran,” Oren wrote. “This would now not take place, as so many feared, before the U.S. elections.”

Since that speech in 2012, Obama has reached at least a framework agreement with Iran that would leave much of the country’s nuclear program in place. Oren told me that Obama’s proposed deal “endangers Israel.” Netanyahu has said much the same. We will have to wait for more memoirs to learn whether Netanyahu, in retrospect, believes his restraint in 2012 was an error.