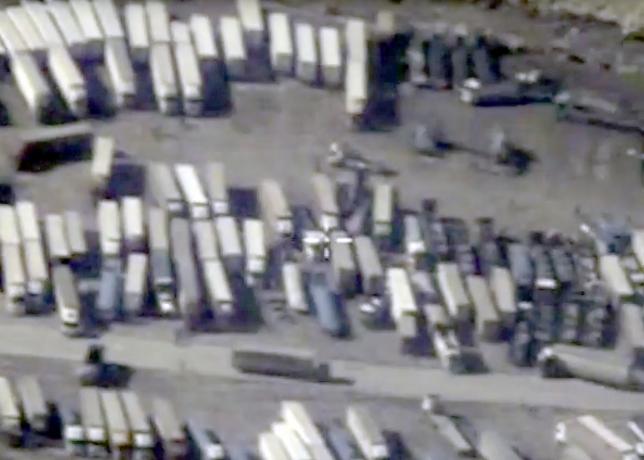 Who are the Islamic State facilitators and legitimizers buying its oil to keep the terror group afloat and why?

A senior U.S. Treasury official said on Thursday that Islamic State militants have made more than $500 million trading oil with significant volumes sold to the government of Syria’s psychopath Baschar al-Assad and some finding its way to Turkey.

Why would the Syrian regime (includes Russia and Iran) and the Turkish government empower IS? For Assad, IS protects his rule by demonstrating who his alternative is if he id deposed. In fact, it was Assad who forged IS by releasing hardcore Islamists from his jail for no reason.

For Turkey, IS is battling the Kurdish separatists Turkey fears. IS also legitimizes the Muslim Brotherhood because, like Assad, the well organized extremist organization can claim it is the lesser of two evils.

Each, in his own right, wants IS to survive and prosper. This is why Russia has not been attacking IS positions effectively.

The United States, France, Britain and Russia have vowed to defeat Islamic State, which uses an extreme interpretation of Islam to justify attacks and brutality against the West.

A U.S.-led coalition is bombing the hardline Sunni group in an attempt to kill its leaders and cripple the oil wells which the group uses to finance its rule and attacks abroad.

In one of the most detailed public explanations of Islamic State’s oil trade, U.S. Treasury Department official Adam Szubin said militants were selling as much as $40 million a month of oil at the installations which was then spirited on trucks across the battlelines of the Syrian civil war and sometimes further.

Szubin, acting under secretary for Terrorism and Financial Intelligence with the Treasury, told an audience at Chatham House in London:

“ISIL is selling a great deal of oil to the Assad regime. Some is coming across the border into Turkey… Our sense is that ISIL is taking its profits basically at the wellhead and so while you do have ISIL oil ending up in a variety of different places that’s not really the pressure we want when it comes to stemming the flow of funding – it really comes down to taking down their infrastructure,””

The “far greater amount” of Islamic State oil ends up under Assad’s control while some is consumed internally in Islamic State-controlled areas. Some ends up in Kurdish regions and some in Turkey, he said.

Szubin said it was unclear whether the $40 million a month estimate could be multiplied over a year. But in remarks prepared for delivery, he said Islamic State had made more than $500 million from the oil trade, but did not give a more specific time period.

After Turkey downed a Russian fighter jet last month, Russian President Vladimir Putin said he had intelligence that large amounts of oil and petroleum products were moving across the border from Islamic State territories to Turkey.

The son of Turkish President Tayyip Erdogan has denied Russian allegations that he and his family were profiting from the illegal smuggling of oil from Islamic State-held territory.

Assad and Erdogan are the Islamic State facilitators and legitimizers.

In an attempt to cut militants’ links to the global financial system, Szubin said the United States had worked with Iraq to close down dozens of bank branches in Islamic State-held territories. Szubin said militants had looted up to $1 billion from bank vaults in Syria and Iraq, but he said Islamic State’s oil trade was the main target.

Islamic State militants claimed responsibility for a Nov. 13 attack on Paris that killed 130 people and the Oct. 31 downing of a Russian passenger aircraft over Egypt’s Sinai region that killed 224.

They promise more attacks on the West and Russia and have claimed that U.S.-born Syed Rizwan Farook and his Pakistani wife Tashfeen Malik who killed 14 people in a mass shooting in Southern California last week were its followers.