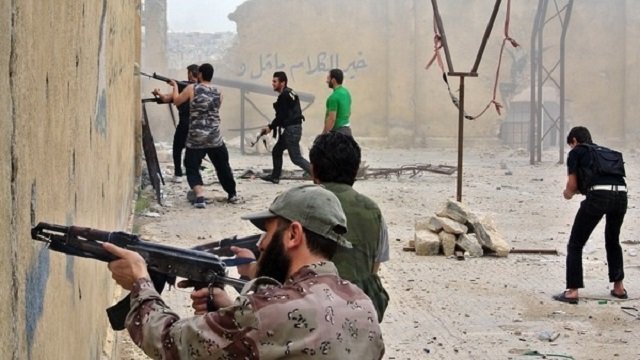 The Arabic Sky News reported yesterday that today new direct battles erupted between ISIS and Hezbollah in the vicinity of Qusayr. ISIS battles Hezbollah for control of the strategic town of Qusayr.

According to several opposition sources, both sides suffered high casualties. Hezbollah seems to have lost “dozens” of fighters. Al-Manar TV, which Hezbollah owns, denied the reports.

Qusayr is one of the most strategic towns captured by ISIS. It could block the supply lines between Damascus and the Mediterranean coast where the Assad regime is strongest.

This is one of the very few battles where ISIS and Hezbollah have faced each other on the battlefields in Syria.

If “dozens” of Hezbollah fighters did indeed perish over the last two days of very intense fighting, it could be disastrous for the Lebanese terror group, which already suffers from many in its community refusing to fight in Syria, and from Shiite mothers objecting to Hezbollah fighting the majority Sunnis instead of the Israelis.

Hezbollah’s own existence rests on the notion its mission is to resist Israel. This makes its involvement in Syria an anomaly Shiite mothers are more and more refuting when their sons are dying at a high rate.

Meanwhile, a local media activist told Alaraby Aljadeed late Tuesday that ISIS had seized control of the Naimat hills, adding that members of the extremist group “blew up a regime tank… killing all of its crew.”

The London-based daily also cited the ISIS-affiliated Amaq news outlet as claiming that members of the extremist group had “managed to seize control of the Naimat hills near the city of Qusayr in the southern countryside of Homs.”

“The [victory] comes after fierce clashes with Hezbollah militants that left dozens of them dead,” the quoted Amaq report said.

When ISIS battles Hezbollah, neither side should win.

GCC Widen Sanctions Against Hezbollah
A Virus with a Hijab
Obama’s Doctrine: Extend a War to Defeat You Just to Force a Peace That Won’t Serve You
Syria 450