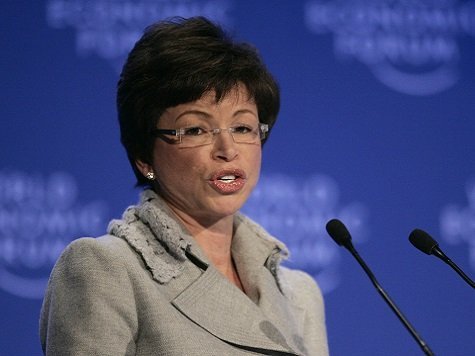 Is Valerie Jarrett a Spy for Russia Too?

TFS Note: Is Valerie Jarrett a Spy for Russia Too? No wonder Vladimir Putin gets away with murder in Syria, Ukraine, and  Iran. Our White House is really the Red House now.

Jarrett’s dad, pathologist and geneticist Dr. James Bowman, had extensive ties to Communist associations and individuals, his lengthy FBI file shows. In 1950 Bowman was in communication with a paid Soviet agent named Alfred Stern, who fled to Prague after getting charged with espionage. Bowman was also a member of a Communist-sympathizing group called the Association of Internes and Medical Students. After his discharge from the Army Medical Corps in 1955, Bowman moved to Iran to work, the FBI records show.

According to Bowman’s government file the Association of Internes and Medical Students is an organization that “has long been a faithful follower of the Communist Party line” and engages in un-American activities. Bowman was born in Washington D.C. and had deep ties to Chicago, where he often collaborated with fellow Communists. JW also obtained documents on Bowman from the U.S. Office of Personnel Management (OPM) showing that the FBI was brought into investigate him for his membership in a group that “follows the communist party line.” The Jarrett family Communist ties also include a business partnership between Jarrett’s maternal grandpa, Robert Rochon Taylor, and Stern, the Soviet agent associated with her dad.

Jarrett’s father-in-law, Vernon Jarrett, was also another big-time Chicago Communist, according to separate FBI files obtained by JW as part of a probe into the Jarrett family’s Communist ties. For a period of time Vernon Jarrett appeared on the FBI’s Security Index and was considered a potential Communist saboteur who was to be arrested in the event of a conflict with the Union of Soviet Socialist Republics (USSR). His FBI file reveals that he was assigned to write propaganda for a Communist Party front group in Chicago that would “disseminate the Communist Party line among…the middle class.”

It’s been well documented that Valerie Jarrett, a Chicago lawyer and longtime Obama confidant, is a liberal extremist who wields tremendous power in the White House. Faithful to her roots, she still has connections to many Communist and extremist groups, including the Muslim Brotherhood. Jarrett and her family also had strong ties to Frank Marshal Davis, a big Obama mentor and Communist Party member with an extensive FBI file.

JW has exposed Valerie Jarrett’s many transgressions over the years, including her role in covering up a scandalous gun-running operation carried out by the Department of Justice (DOJ). Last fall JW obtained public records that show Jarrett was a key player in the effort to cover up that Attorney General Eric Holder lied to Congress about the Fast and Furious, a disastrous experiment in which the Bureau of Alcohol, Tobacco Firearms and Explosives (ATF) allowed guns from the U.S. to be smuggled into Mexico so they could eventually be traced to drug cartels. Instead, federal law enforcement officers lost track of hundreds of weapons which have been used in an unknown number of crimes, including the murder of a U.S. Border Patrol agent in Arizona.

In 2008 JW got documents linking Valerie Jarrett, who also served as co-chairman of Obama’s presidential transition team, to a series of real estate scandals, including several housing projects operated by convicted felon and Obama fundraiser/friend Antoin “Tony” Rezko. According to the documents obtained from the Illinois Secretary of State, Valerie Jarrett served as a board member for several organizations that provided funding and support for Chicago slum projects operated by Rezko.

Is Valerie Jarrett a Spy for Russia Too?