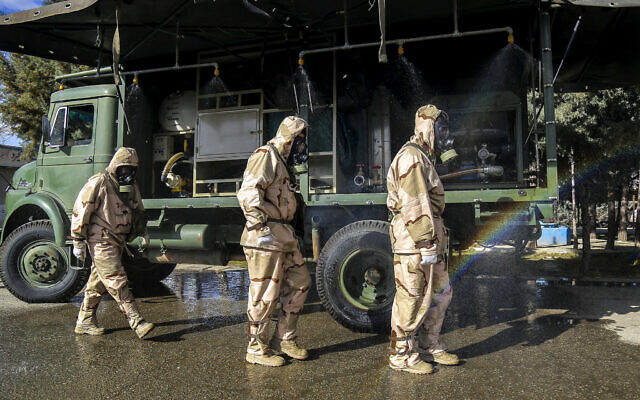 Is the Assad Army Devastated by COVID-19 Infections?

When one looks at the map of the Middle East, and specifically at the four countries Syria shares borders with in terms of their COVID-19 infections rate, you start wondering why is Assad refusing to publish the coronavirus cases surely Syria is infected with? What gives? Why all this secrecy? Is the Assad army devastated by the COVID-19 infections?

When one takes a closer look at two of Syria’s neighboring countries, in addition to Iran fighting alongside his army, you begin to grasp the reasons for his secrecy.

As of March 22, Iran has officially declared 21,638 COVID-19 cases. Unofficially, Iran has been digging up mass graves and burying people by the thousands. Iran’s death rate stands at 18% when China’s own death rate hovers around 4%.

The coronavirus is so devastating to the country, Khamenei has announced a furlough for some 54,000 prisoners to stop the virus from killing in Iran’s crowded prison system. Some of those furloughed include political prisoners, which demonstrate clearly how deadly the virus has been. To set free political prisoners, that’s unheard of in an authoritarian and brutal regime like Khamenei’s.

Now consider a small fact most people are unaware of. Iran has more troops in Syria than Assad has under his command. The devastating war has depleted Assad forces to the point where Iran and Russia keep supplying him with the manpower and the means to continue fighting.

According to an extensive report published by the National Council of Resistance of Iran (NCRI), Tehran has augmented Assad army to no fewer than 70,000 fighters. Assad army numbers around 50,000 troops.

NCRI even provided a detailed breakdown. The non-Iranian mercenaries number around 55,000 men with Iraqi militias and Afghani mercenaries each contributing 20,000 fighters. Throw in Lebanese Hezbollah, which has some 10,000 men fighting as well as Pakistani and Palestinian mercenaries that number about 5,000.

In addition, the Khamenei regime has contributed up to 10,000 Iranian IRGC forces, and about 6,000 from the regular Iranian Army. With the exception of the Pakistani mercenaries, the rest all come from countries that have seen considerable to devastating coronavirus infections.

Is it possible that so many Iranian troops, as exposed to the COVID-19 as any other Iranian during furloughs and leave of absence, may not have infected the Assad army? Not to mention the tens of thousands of Iranian advisors and religious Imams arriving from Qom to ethnically cleanse Syria.

Could it be that the Assad army infection rate has debilitated its capacity to fight? Could this be the reason why Assad is keeping the infections a closely held secret? It is certainly possible, and we believe it to be highly probable.

This may also explain the reason why Assad halted the Idlib assault. And why Russia quickly negotiated with Turkey a reprieve of hostilities. If true, the Iranian infection rate saved the people of Idlib from death and destruction.

Somebody’s tragedy has become someone else’s relief. The people of Syria deserve to know the truth. The people of Idlib deserve the suspension of Khameni’s terror against their civilians. Meanwhile, we hope the Iranian people succeed, after this tragedy, in deposing Khamenei and his regime of terror.

Is the Assad Army Devastated by COVID-19 Infections?