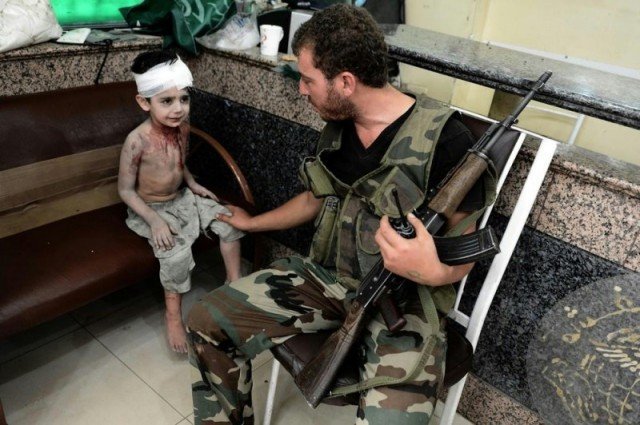 Is Obama out to destroy the Free Syrian Army?

In July of 2013, General Martin Dempsey, Chairman of the Joint Chiefs of Staff, in a letter to Congress laid out different scenarios in case the US had to carry out strikes against the Assad regime.

In his letter, General Dempsey discussed five different options of a US engagement in Syria. The options included a simple training of the Free Syrian Army and some logistical support to the most complex involving US troops on the ground in Syria to control chemical weapons by establishing a no-fly zone. The latter option would mean the US would be able to destroy the air defense capabilities of Assad if Assad attempted to disregard the no-fly rules imposed against his regime.

The three options in-between all include the possibilities of destroying Syria’s air defense systems. Nothing in General Dempsey’s letter indicated the US had any concerns over destroying those capabilities.

The following two paragraphs were extracted from that article:

Officials also told Fox News that the U.S. has a good sense of where the Syrian air defenses, along with their command and control centers, are located. If Assad were to use those capabilities to threaten U.S. forces, it would put his air defenses at risk, a senior official told Fox News.

The above confirms what General Dempsey told Congress in his July of 2013 letter.

Asked Monday about the prospect of striking Assad’s regime if his forces were to target Americans, White House spokesman Josh Earnest said there will be “rules of engagement that are related to any military orders the president directs. It won’t surprise you to know that there are contingencies related to self-defense when it comes to these sorts of rules of engagement,”

Fair enough, Mr. Earnest is confirming, indirectly, that the US will use its superior military capabilities to protect the assets striking ISIL.

However, in another part of the article, when asked if the US would strike the Assad regime, Fox News writes

Administration officials have long insisted that one of their concerns with taking airstrikes against the Assad regime is the government’s formidable air defenses, which could put American forces at risk.

The spin is downright ugly and it shows that Obama would not strike Assad no matter the consequences against the Syrian civilians and US interests.

What if the military aid to the Free Syrian Army is aimed at destroying ISIL and self-destruct at the same time because it is not enough to win decisively? This would not surprise me at all given Obama has become Assad’s staunchest protector.

Is Obama out to destroy the Free Syrian Army to help Assad win his war?

With Assad in power, Syria will never know peace
Kerry Saved Genocidal Assad. What Does That Make Him?
Limit Obama’s damage by voting for anyone but a Democrat
Slippery Barack Obama 967 Support U.S. Allies 149 Syria News 1181 Syrian Revolution 1351