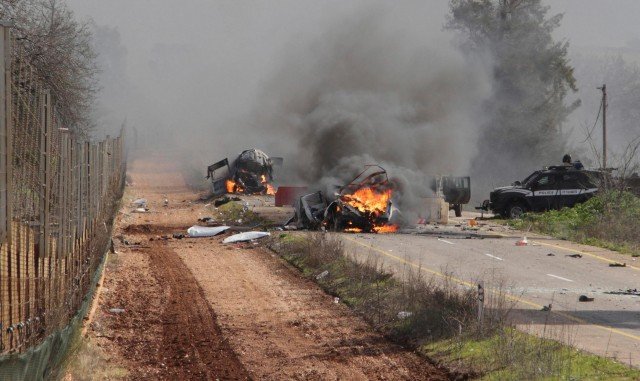 Is it time for Israel to strike Hezbollah?

April 30, 2015 7:58 pm 0
Last Straw to Save Assad is Gaza
Sunni Terror Will Abet Only When The Iranian Mullahs Are Defeated
Go Abdullah Go

Hezbollah must be dismembered if the Levant is ever to stabilize. The organization is armed with 100,000 rockets and missiles, and according to Major-General Eyal Eizenberg, Israel should expect Hezbollah would launch 1,000 to 1,500 rockets a day against its citizens.

Since Hezbollah has lost all legitimacy in the eyes of the Arab street and is presently stretched thin fighting in Syria in support of the Assad regime, is it time for Israel to strike Hezbollah to remove this threat permanently? Hezbollah may receive better and more accurate missiles in the future, which may pause a more acute threat against Israel.

The question of what to do while Hezbollah is bleeding in Syria must be on the minds of the leadership in Israel.

Tensions are rising on the Syrian-Israeli borders. In January an Israeli drone missile hit an Iranian IRGC convoy that killed an Iranian general and the son of Imad Mughnyieh. Last week, Israel attacked an air base in the Qalamoun mountains said to be holding SCUD missiles destined for Hezbollah.

How could Israel protect itself from the Hezbollah rockets and missiles is handicapping the Jewish State; nonetheless, the risks involved might be mitigated by the valuable time Hezbollah might use to regroup in the future and have access to even more lethal weapons.

If Israel strikes, what support will Saudi Arabia, Qatar, and Turkey provide given Hezbollah is fighting in Syria? Will they direct tens of thousands of fighters and materials towards Damascus to open a major front neither Hezbollah nor Iran can neglect to protect, or will they move at their pace without any coordination with Israel? Will either country help Israel to answer the question: Is it time for Israel to strike Hezbollah?

The cost benefit analysis, if one takes into consideration the history of Hezbollah and the sophisticated weapons time will afford it to obtain, seems to point to some kind of Israeli action. Israel knows that Hezbollah is a major threat to its existence and safety. The sooner it is able to sever it into pieces, the more secure Israel would be. It is a job that has to be done sooner or later, and the last thing Israel wants to see is Hezbollah rising from Syria’s ashes with more lethal weapons at its disposal.

Saudi Arabia is dismembering the Houthis in Yemen just in time not to threaten the Kingdom with tens of thousands of missiles. That luxury is not available to Israel; however, neither is the luxury of waiting for Hezbollah to grow and threaten even more in the future. Is it time for Israel to strike Hezbollah? Or should Israel risk waiting until the Assad regime is deposed and Hezbollah starved from Iranian support?

After all, Iran would not hesitate a moment to station nuclear weapons in the hands of Hezbollah on Lebanese soil once Iran builds its arsenal whether Assad is deposed or not.

Is it time for Israel to strike Hezbollah?

Syria Rebels Insulted by US Training Program
The IRGC is dumber than we think
Syria is the Superbowl of Islamic Fanatics
Radicalism 567 Support U.S. Allies 152