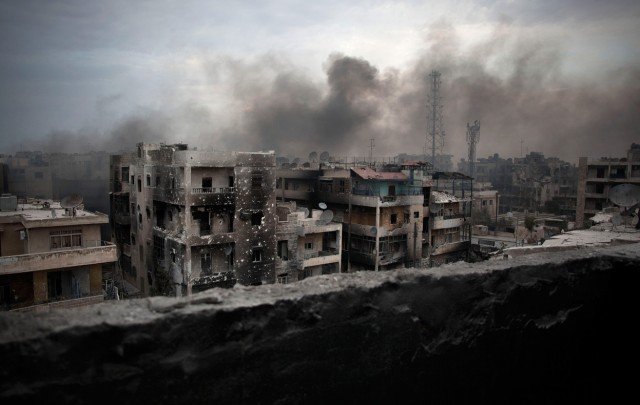 Is Assad worth the trail of destruction and violence?

December 25, 2014 6:11 am 0
When Will Helpless Syrian Civilians Earn a “Never Again”?
Syrian People Suffering Because Nobody Lobbies For Them
Syrian Observer is an Extension of the Muslim Brotherhood

Somebody, somewhere should scientifically answer this question: Is Assad worth the trail of destruction and violence he and his supporters, domestic and foreign, are leaving behind them? Is he worth the 50% in Ruble devaluation or Iran losing billions because of an oil war neither Putin nor Khamenei anticipated?

Here is my list of major costs to Syrian society, and those of our neighbors as well as foreign nations supporting Assad.

All this destruction because Putin and Khamenei insisted on Assad retaining power. All this destruction because many Syrians did not see how valuable the opportunity was in 2011 to co-govern with the moderate Generals of the Free Syrian Army who defected instead of standing by a man whose history of violence is their liability today. My guess, if polled now, the absolute majority of Syrians would select the option of power sharing, without Assad in power, than to see their country erased from existence and their loved ones dying needlessly.

Some journalist should ask Putin whether supporting Assad was worth the oil war and the Ruble tumbling. The same should be asked of Khamenei whose economy cannot withstand a $60 a barrel for too long.

What does this experience tell us about Khamenei and Putin? Their nations are about to collapse under the weight of their own idiocy. It also tells us how inconsequential Assad has become to the country and to his foreign supporters. The economic ministers of Russia and Iran should voice their concerns over their bosses’ destructive political policies.

It also tells us that if you are an oil producing country, do not mess with Saudi Arabia capable of producing north of 11m barrels of oil a day.

I think Saudi Arabia should start a new international initiative aimed at removing Assad and the 150 criminals around him to be replaced with a new coalition to govern that guarantees the safety of all Syrians, especially the minorities. Do not let Putin or Khamenei take another step towards another one of their solutions for Syria because it will also end up badly.

Is Assad worth the trail of destruction and violence?