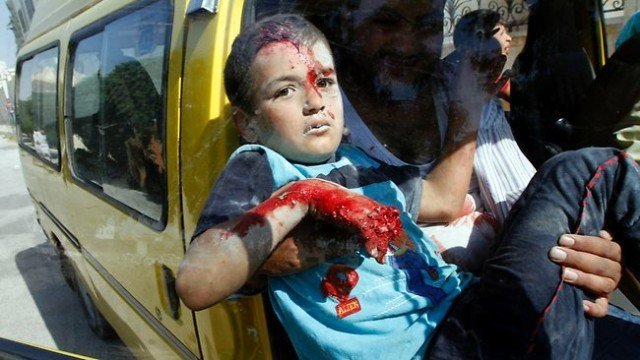 Is Assad preparing for dismissal of his crimes?

There were some intelligence reports circulating, right after the death of Jamil al-Assad, that he has left behind a fortune of $5 Billion deposited in Austrian banks. Whether the number is accurate or exaggerated, the fact remains that Jamil, brother to Hafez and uncle to Baschar, could not have possibly died poor. With such stories circulating, Assad must face their consequences. is Assad preparing for dismissal of his crimes?

Another fact to draw from this number is: “How much Hafez was worth if his younger brother left behind $5 Billions?” Throughout the years, the Assad family, running a relatively poor and underdeveloped country, found a new industry to supplement their income. We call that industry terror; they call it the Assad Trust Fund.

Now that the Syrian war is going terribly wrong for all sides concerned, BBC News exposed an Alawite rift between the rich and the poor when it published a quote from a pro-Assad Syrian resident sickened by the sacrifices the minorities are experiencing:

More and more Alawites who are losing family members on the battlefield could be heard repeating the saying: “The grave for us and the palaces for them.”

IS ASSAD PREPARING FOR THE DISMISSAL OF HIS CRIMES?

Another side of the story trumps the economic divide in which the Assad propagandists may be spinning (Just a hunch). This part attempts to portray Assad as out of control of his own military. Honestly, if one wants to extricate oneself from the responsibilities of one’s own actions, what better way than to say I lost control of my forces?

A new class is emerging in Syria of warlords who have grown rich with the money they have earned from kidnapping ransoms and theft. Their rise has led many to believe that President Assad cannot control his own militia anymore.

Is Assad preparing for dismissal of his crimes? Beyond this rancor between the haves and the haves not, and within the context of Graves and Palaces, perking beneath the surface is yet another concern the Alawites are expressing to show not only do they have to fear the extreme Islamists for their security, but they, also, have to fear their own militias for their survival:

A few weeks ago, hundreds of residents of Dukhani and Dwaila in the Ghouta fled after members of the National Defence Forces (NDF), a pro-government militia, warned them of the imminent threat from a group that considers Shia Muslims heretics and has told members of other faiths that they must convert to Islam, pay special taxes or die.

The residents quickly returned after being informed by the army that they had never been at risk, but once they got home they found their possessions – including their furniture – had been stolen

In other words, the Alawites have started the process of self-cannibalization.

IRAN SEEKING A WAY OUT

The article ends by claiming that rumors are circulating Iran may be coordinating with Saudi Arabia to find a sensible solution now that it is clear to everyone this Syrian war has no winners, only losers.

Sources in Damascus speculate that Iran may be considering a deal like the one that saw it persuade Nouri al-Maliki to stand down as Iraqi prime minister … In return, Mr Maliki was appointed one of Iraq’s three vice-presidents, a ceremonial post that comes with immunities and a security detail.

Something similar in Syria might see Mr Assad and other members of the elite step aside, but the military and security establishment would likely be left untouched.

With minor differences, this was a plan the Reform Party of Syria alluded to, in 2007, to many powerful figures in the US and Europe. To insure the safety of the minorities, those outside the Assad circle can retain control of the army, but not the security services; they can also share in a new government representative of all the political ideologies.

Seven years later, Iran is discussing the same scenario as part of an exit strategy for Syria.

As far as immunity for Assad and his thugs who destroyed Syria when they could have concluded a similar deal in 2011 before their appetite to commit crimes against Humanity, this should be a non-starter. In 2011, there would have been many in the Syrian opposition who would have agreed to an Assad immunity.

Today, it is a different story. Providing Assad and his entourage with immunity for his crimes against humanity charges is like permitting Hitler, Himmler, Heydrich, Mengele, and Eichmann to retire to Berchtesgaden. We have to consider the consequences of immunity as we look to the future of the region.

With both Omar al-Bashir of Sudan and Baschar al-Assad of Syria obtaining immunities (If it comes to that), we might as well build a minaret whose only call is to recruit men of violence and mass murderers.

Is Assad preparing for dismissal of his crimes?