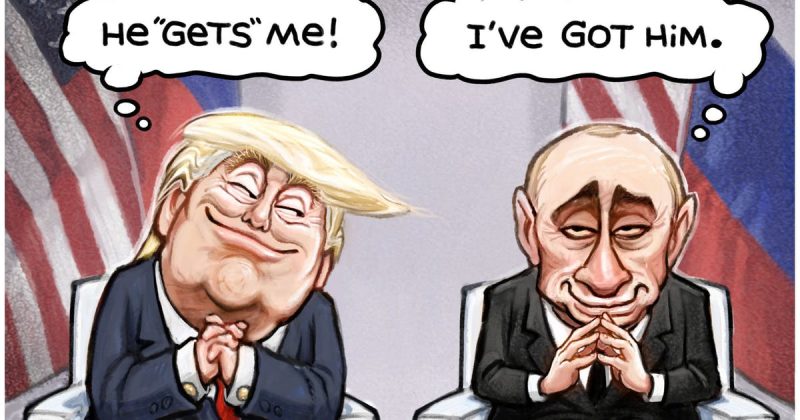 Is Irrational Trump a Danger to National Security?

December 22, 2018 10:06 am 0
Putin Shows How Dumb Donald Obama Lite Trump Has Been
Trump Should Draw a Real Red Line in Syria
Trump Released the Military Aid to Lebanon

Have you considered the small detail that Trump always wants the last word? He is never satisfied with ending an argument or a debate with his opponent finishing the last sentence. His Twitter behavior attests to this truth. This brings us to our assumption: Is irrational Trump a danger to national security?

What is Trump’s last word when he loses some of the double-digit number of investigations swirling around his unethical behavior? How does Trump fire back?

Does he use The Office to exact vendettas upon those watching the investigations as much as those investigating him even if it endangers national security? We believe so. For Donald Trump, irrational Trump comes first. The country and its institutions are in danger if neither tow his line.

Can one say that exiting Syria is a vendetta against those institutions that have worked so hard to maintain the United States relevant in the Middle East without much cost in lives or money? Budgeting $200m to help the Kurds in Syria is a drop in the $4T plus budget bucket of the U.S. So, it is not about money.

Furthermore, our troops are securely established in Syria with little danger to their positions. As unfortunate as could be, only four U.S. soldiers have died in Syria ever since U.S troops established their presence to defeat ISIS. This is a minuscule number in comparison to the benefits we derive from our presence in that hot spot of the world, which is home to our two worst enemies; Russia and Iran.

Can one say that exiting Syria is Trump’s Christmas gift to Putin as a way to poke those U.S. institutions either investigating his unethical behavior or standing-by without much support? Do you think irrational Trump is capable of endangering national security to satisfy his own pettiness?

America is drifting in uncharted territories where our commander-in-chief is behaving irrationally for the sole purpose of protecting himself from paying for his repeated mistakes.

Exiting Syria so rapidly against the opinion and consensus of our policy makers and experts on Syria has demonstrated that Trump is not only incapable of understanding the underbelly of our global policies as a superpower, but it also showed a sinister side to this man capable of putting himself first ahead of any and all. Including his own country.

Just imagine how dangerous Trump could be to our nation if Mueller accuses him of colluding with our enemies. This could be tantamount to high treason if our country suffers the consequences of his actions.

We need to stop Trump immediately. Any way we can.

Is Irrational Trump a Danger to National Security?