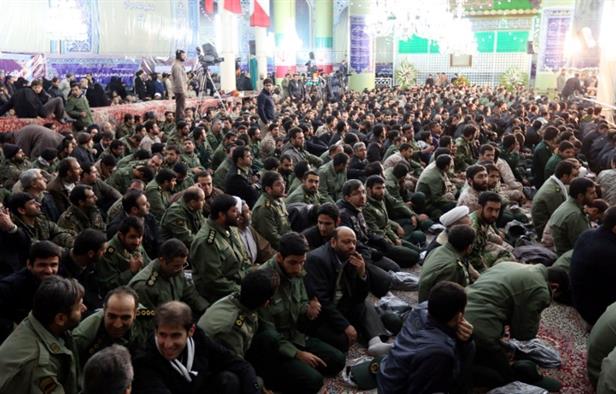 November 5, 2015 5:40 am 0
Syria Will Bury Khamenei Yet
Obama Should Have Written Letters to IRGC Too
Iran-backed advance in southern Syria rattles Israel

Officers in Iran’s Revolutionary Guard Corps (IRGC) have started to refuse deployments in Syria amid their country’s mounting casualties in the war-torn country, according to Asharq Alawsat.

The Saudi-owned daily reported Tuesday that the IRGC has transferred a number of commanders and officers to military courts after they refused to serve in Syria.

“The IRGC’s decision came after its members were given the choice of either carrying out missions in Syria or being dismissed and banned from all government posts,” the paper cited a “well-informed source” as saying.

The source claimed that after a rising number of people asked to leave the IRGC, especially among the younger generation, the military institution was forced to review its former policy.

Members now have to “go to Syria or face court-martial with the possibility of being charged with ‘insubordination and treachery,” the unnamed source added.

“Defiance of orders and refusal to go to the battlefield in Syria is currently a source of great concern for commanders in the IRGC, which is more loyal to the Vilayat-e Faqih system [than any other Iranian institution.]”

According to the source, “some IRGC commanders in the Ahvaz region have resorted to retirement and devoting themselves to [business ventures] as they have passed retirement age.”

“The IRGC’s military court has also opened a large scale investigation in to people registering for retirement in this critical period.”

The source also said that the death of large numbers of Quds Force fighters, special forces commandos and infantrymen has compelled the these forces to resort to recruiting officers from the IRGC’s administrative departments for fear that a large number of elite forces will be killed on the battlefield.

Asharq Alawsat’s report comes amid a dramatic increase in Iranian military casualities in Syria, where Tehran has reportedly deployed hundreds of troops to fight alongside regime forces against rebels in the northwest of the country.

However, the IRGC official did not provide a death toll and insisted that Tehran was only sending advisors, and not combat troops.

A number of high-ranking officers have been killed in Iran in the past month, including Brigadier General Reza Khavari, a senior commander in the IRGC’s Fatemiyoun Division, General Farshad Hasounizad, the former head of the IRGC’s elite Saberin Brigade, and Hamid Mokhtarband, the former chief-of-staff of the 1st Brigade of Iran’s crack 92nd Armored Division, which is considered the country’s top armored unit.

Lower-ranking officers, including Colonel Ezzatollah Soleimani—the commander of the Elite Battalion of the 44th Hazrat Bani Hashem Brigade—have also been among the dozens killed since Iran ramped up its military intervention in Syria.

Their deaths followed the death in early October of IRGC general Hussein Hamdani, who was one of the IRGC’s leading officers and the country’s top military advisor in Syria.

Relatives of Syria’s Minister of Defense Fight for IRGC
Who is Hadi Farhan Abdullah al-Ameri?
How much the world hates Obama
Iranian Terror 586