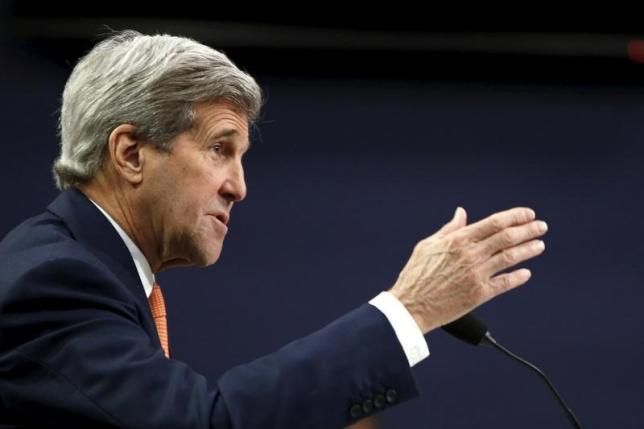 March 12, 2016 10:05 am 0
To Defeat Islamic State, Remove Assad
Falafel East Wing Story About Barack and Valerie
When we elect an ignorant president

U.S. Secretary of State John Kerry stressed the need to move now to end the conflicts in Syria and Yemen in talks with top Saudi officials on Friday, a senior U.S. official said. John Kerry is Iran’s shadow foreign minister.

Never in the past has he pressured Iran for its violence against the Syrian people or Russia for its terror against Syrian civilians. Only our allies get the pressure treatment of Iran’s shadow foreign minister.

Kerry also sought to reassure officials of the importance of U.S.-Saudi ties a day after President Barack Obama was quoted in a U.S. magazine as saying regional rivals Saudi Arabia and Iran need to “share the neighborhood” and establish a “cold peace.” Since when a sitting US President gives comfort to America’s enemies who burn US flags and chant “death to America” by forcing our allies to share with their terror? Any wonder Americans are angry.

“We have to talk about Syria,” Kerry said after he met the king as he began a separate discussion with the three other officials, according to a U.S. pool reporter accompanying him.

Syrian peace talks are set to get under way in Geneva next week, and the main Syrian opposition group, which is backed by Saudi Arabia, has said it will attend.

The U.N.-brokered talks will take place two weeks after the start of a cessation of hostilities agreement that has reduced the violence but not completely stopped the fighting, with further outbreaks reported in western Syria on Friday.

The cessation is the first truce of its kind in a five-year-old war that has killed more than 250,000 people and driven millions of Syrians from their homes.

“Kerry emphasized that now is the time to keep moving forward toward ending the conflicts in Syria and Yemen,” a senior U.S. State Department official said in an email.

Washington and allies including Saudi Arabia and Turkey back opposition groups representing political and armed factions in Syria’s civil war while Russia and Iran support the psychopath Baschar al-Assad who has gassed women and children in their sleep.