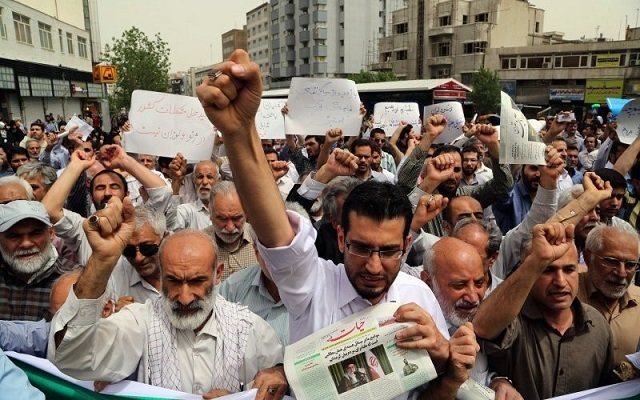 August 15, 2015 5:54 am 0
When Speaking of Yemen, Iran Ignores Its Atrocities in Syria
Iranian Fighter-bombers Operating in Syria
Hey Stupid! It’s Not About Nukes, It’s About Life and Death

Source: The Daily Beast (Iranian Dissidents Against the Iran Deal)

Iranian dissidents and human rights activists warn the West not to give money to the regime that terrorizes them.
In the past few weeks, some Iranian activists have vocally supported the nuclear deal between Iran and the P5+1 (China, Russia, France, United Kingdom, United States and Germany). While we deeply respect the experience and views of these men and women, it is important to hear all perspectives.We represent another collection of Iranian dissidents who share the world’s hope for a better future but believe that appeasing the Iranian regime will lead to a more dangerous world.We have spent our lives advocating for peace, justice and freedom in Iran. We represent a diverse array of Iranians who hope to warn the world of the danger of this regime regardless of how many centrifuges spin in Iran.This deal will provide up to $150 billion windfall of cash into the bank account of our tyrants and theocrats. This money will not be spent on the Iranian people but rather to enrich a repressive regime.

Sadly, the world has not demanded real improvements in human rights. Thousands of activists continue to languish behind bars (including several Americans) and it is tragic that their release was not included in these discussions.

We are sounding the alarm bells before it is too late. Those who care about peace should help restore focus to the Iranian regime’s brutal human rights records, its support for global terror and role in destabilizing the Middle East. More pressure should be applied to the regime, not less.

Today in Iran, political prisoners are tortured. Bloggers, journalists and teachersremain behind bars. Sexual and religious rights are trampled. Women are treated as second class citizens.

Iranian Dissidents against the Iran Deal

Thoughts on Carrots and Sticks
Obama’s chocolate factory
Who should we trust with possessing nuclear weapons in the Middle East?
Iranian Terror 594