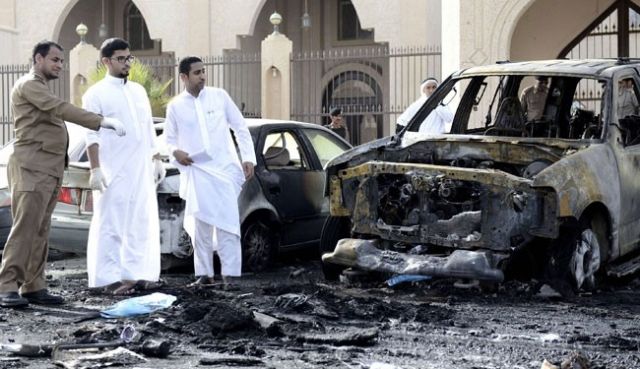 June 2, 2015 8:00 pm 0
Amiri for the 3 Americans? Or is Amiri a Plant?
Only with Regime Change in Saudi Arabia, Arabs Will Get a Chance at Renaissance
Why Muslim Leaders are So Corrupt

The two terrorist attacks targeting mosques in Al-Qadeeh and Dammam in the Eastern Province of Saudi Arabia prove—if proof were ever needed—that the Kingdom is fighting a real war.

Even before Operation Decisive Storm was launched in Yemen, Iran’s leaders were scrambling to issue one threat after another against Saudi Arabia. Tehran’s manic desire to take over large areas of the Arab world means that anyone willing to take a stand against the country’s brash meddling is considered to be “interfering in Iran’s internal affairs!” Well, why not, particularly when some top officials in Tehran already boast that Iran’s borders now reach the Mediterranean, and that it is in full control of four Arab capitals!

Iran’s “new Arab colonies” aside, Tehran firmly believes it is the rightful spokesperson for any Shi’ite, anywhere in the Arab world. It feels it is entitled to issue “diplomas in patriotism” to all those it approves of, and pass the death sentence against those it brands traitors. This is exactly what Hassan Nasrallah, the Secretary General of Lebanon’s Hezbollah, is doing. He recently described any Shi’ite who does not toe his party’s line, and who expresses reservations toward his blind political allegiance to Iran, as “American Embassy Shi’ites!”

In fact, Iranian threats against Saudi Arabia haven’t relented since 2011, ever since the Gulf Cooperation Council (GCC) countries dispatched their Peninsula Shield Force to Bahrain. Bahrain—a GCC member state—needed the Force in order to impose law and order and protect public and private property in the aftermath of sectarian protests and disturbances inspired and orchestrated by Tehran. The threats continued as a reaction against Saudi Arabia and the GCC’s support of Syria’s popular uprising, especially when the uprising was met by wholesale massacres by Bashar Al-Assad’s army and militiamen.

Such threats would never have been issued in the first place had it not been for the old aggressive objectives harbored by the Tehran leadership. No government openly threatens its neighbors if it really believes in “good neighborly relations” and “regional cooperation,” as uttered from time to time by the sweet-talking Iranian President Hassan Rouhani and his Foreign Minister Mohammad Javad Zarif. Unfortunately, Western capitals are only too happy to believe such statements.

Therefore, when the GCC countries felt obliged to defend the legitimate Yemeni leadership, according to the UN-endorsed GCC initiative, the true magnitude of Iran’s involvement became clear for all to see. Iran has been arming, training, financing and organizing the rebel Houthi machine for years. Their massive arsenal, as well as their organizational infrastructure, could not possibly have been there merely for “local” or “domestic” reasons, but are rather part and parcel of Iran’s massive expansionist project under the slogan of “exporting the [Khomeinist] revolution.”

The Houthi coup d’état is just one front in the regional war Iran is fighting, first to crush Saudi Arabia; second, to destroy Gulf security; and third, to impose its hegemony over the whole Arab Mashreq, in addition to the international waterways from the Arab Gulf to the Suez Canal.

This war, however, has not always taken the shape of direct confrontation. Indeed, it has from time to time sought to exploit dubious and misled groups. These groups are the ones adopting the most extreme Takfirist Sunni sectarian discourse to outbid all Sunnis; through committing barbaric murders they are engaged in an all-out war against moderate Sunni Islam.

How Al-Qaeda was conceived is common knowledge by now. We all recall how certain global superpowers actively contributed to the war in Afghanistan, alongside Arab and Muslim countries. Yet some in the West are now accusing these Arab and Muslim countries of being solely responsible for the emergence of post-war extremism in Afghanistan as embodied by Al-Qaeda, and now the Islamic State in Iraq and Syria (ISIS). Some Western commentators, in their zeal to defend and promote the US-Iran nuclear deal, are working overtime to redefine Islamic extremism as “Sunni” extremism, exclusively placing the blame on particular Arab and Muslim countries. In this they are intentionally denying the fact that it was the West that was so keen to turn Afghanistan into the “USSR’s Vietnam!”

Serving the same end—defending and promoting the US-Iran nuclear deal—many in the Western media are busy erasing the unsavory image of the Iranian part in “Islamic” extremism from the West’s collective memory. This is happening even in the US and UK—which for years suffered the tragedy of having their citizens taken hostage, even murdered, in Lebanon in the 1980s.

This phenomenon has recently spread to Japan. The Japan Times recently published a report under the headline “Islamic State builds an ‘air force’ out of truck bombs”. The report painstakingly lays out when and where “truck bombs” were used, including in the Syrian border town of Ayn Al-Arab, also known as Kobani. The author, bless him, tells the readers that this weapon, given the initials SVBIED (suicide vehicle-borne improvised explosive device), was not invented by ISIS: in 1800 a rigged horse cart was used in the failed assassination attempt against Napoleon in Paris. He goes on to cite other examples of the use of “truck bombs” throughout the past decades with the help of American experts who somehow remember Tamil Tiger suicide attacks and the Oklahoma City bombing of 1995, but not the massive 1983 attack on the US Marines headquarters in Beirut!

I doubt this oversight was a result of natural forgetfulness, but rather a genuine attempt—at the highest levels—to exonerate the enemy of yesterday in order to repackage it as the ally of tomorrow.

This is the reason why one needs to deal with the regional Iranian war with full awareness of all its dimensions, avoiding naïve and irresponsible justifications that only serve the arguments of those hell-bent on exonerating Tehran, who are en route to turning Iran’s regional enemies into global pariahs.

With this in mind, any hesitation about condemning the extremist gangs that are perpetrating ISIS’ heinous crimes—including now in Saudi Arabia—will be a priceless gift to the above mentioned dangerous project.

Of course there are grievances, and of course there are social incubators for extremism that are growing and becoming ever-more bitter as a result of maltreatment and abuse. But what we are going through at the moment is a real war which will not be winnable without a truly cohesive, safe and secure society.

As for ISIS, its regional role has now been uncovered for what it really is, at least as far as Syria is concerned. There it is the undercover ally of the Assad regime and its backers.

ISIS has in the last few years uprooted millions of Sunnis, after putting them before an unenviable choice: Either accept Iranian hegemony under the banner of sectarian revenge, or succumb to ISIS’ Dark Age anti-culture of the sword and dagger.

Our countries and minorities do not need foreign protection, be it Iranian or not.

In fact, the future of our religious, sectarian and ethnic minorities must be the responsibility of every patriot who strives for cohesive and solid societies that are based on coexistence, and respect diversity and the right to be different. Those who do not accept the conditions for such coexistence must bear the responsibility for their positions and actions.