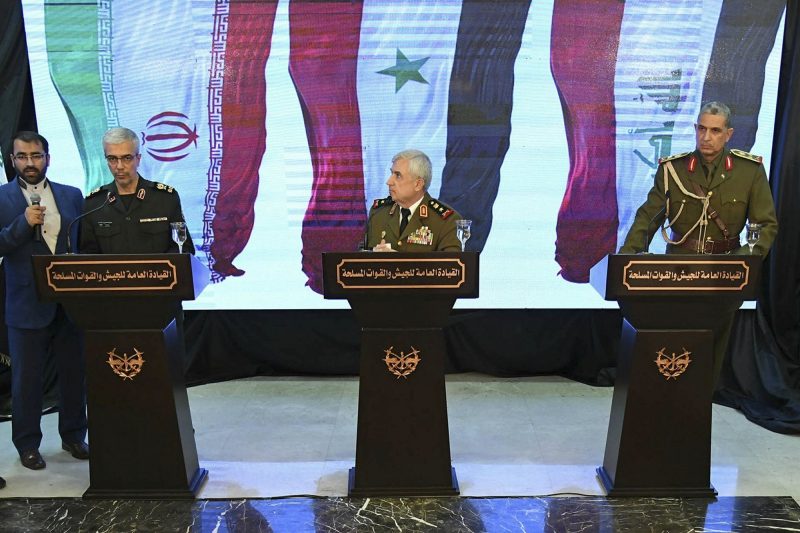 March 18, 2019 9:26 pm 0
An EU Show of Solidarity, a Clash, and a Veto
Fresh Sanctions Against Assad But No Soleimani Solution
It is not about the Alawites of Syria, It is all about Assad

Syria’s defense minister on Monday slammed what he called the “illegitimate” U.S. military presence in his country, vowing that Damascus has a right to self-defense, while Iraq said a border crossing with Syria will open in the coming days. This is Iran soft threatening approach before slamming the United States with terror and mayhem.

Syria’s Gen. Ali Ayoub spoke during a rare joint news conference with visiting Iranian and Iraqi army commanders who have been holding meetings in the capital, Damascus.

The U.S. currently has about 2,000 troops in eastern and northern Syria and is expected to withdraw hundreds of them in the coming months.

The meeting in Damascus illustrates the strong alliance between Iran, Iraq and Syria at a time when the U.S. is seeking to isolate and increase sanctions against Iran and its regional allies.

Tehran has sent troops into Syria to fight alongside Assad forces against Syrian civilians. The U.S.-backed Kurdish forces are the ones to rout ISIS from its enclaves, and not Iran or Assad.

After years of setbacks, Assad forces have been on the offensive since 2016. With help from Iran and Russia,he regained control of parts of the country. Ayoub vowed to eventually capture the last major rebel stronghold in the northwestern province of Idlib.

Everything is not rosy between Iranian and Russian troops in Syria. There are clear and visible tensions the Syrian defense minister denied vehemently.

Iranian army commander Maj. Gen. Mohammad Hossein Bagheri said that Assad invited Iranian troops to Syria and would only leave if the Syrian people ask. Most Syrians do not believe Assad’s authority is legitimate, which makes Iran an occupying force in Syria.

Iran’s official IRNA news agency quoted Bagheri as saying that Iran, Syria and Iraq will work together to bring an end to the presence of foreign forces in Syria. This is code for “We will terrorize American troops in Syria”. Iran soft threatening approach is nothing but a facade for terror.