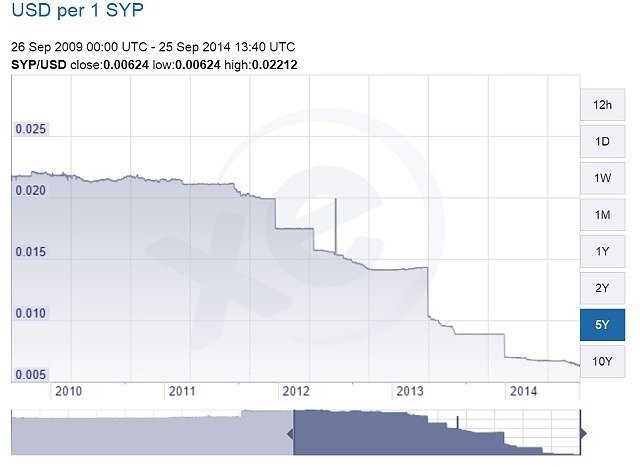 The economic burdens Syria is suffering from are not the subject of many articles or discussions. Our attention has been mostly fixated on terror, Chemical Weapons, and Obama’s disastrous foreign policy that led us astray in terms of both focus and imperatives.

It is obvious to everyone that Assad, as the war continues, has secured control of western Syria to include the seat of the government. If the US does not strike Assad, which is obvious to everyone by now given Obama’s hesitation and assurances to Iran, Assad will survive with the support of Russia and Iran.

Let us then look at what exactly Assad will be ruling over in terms of the Syria we see before us, the Syria he will inherit.

Prior to the civil war, Syria relied upon for its fiscal and budgetary needs on three economic revenue-based components. One was oil revenues (22% of revenues), another was export of agricultural products (17%), and the last were labor services (60%). Outside of these revenues, Syria had little except the debt Russia and Iran accorded the Assad regime to survive the civil war.

The labor services component generated from remittances has been diverted to countries like Jordan, Lebanon, and Turkey with millions of refugees. It is not clear with half the population displaced what revenues this sector is still generating.

The oil and export sectors have been destroyed because of the war with no contributing revenues to the budget.

Syria’s fiscal policy would have projected a 7.5% ratio of GDP in terms of debt. Barring reforms and VAT implementation, the IMF in a report drafted in 2009 warned about the impact of debt without accompanying fiscal reforms the IMF recommended, and which no longer apply in the middle of a war:

However, if the reforms underlying the baseline scenario falter, the fiscal outlook would significantly deteriorate. For example, a substantial delay in the implementation of the VAT, a re-emergence of large implicit fuel subsidies, and waning efforts to control wages and rationalize capital spending could lead to growing fiscal deficits and public debt ratios rising to about 50 percent of GDP.

If the IMF is correct in its projections, Syria’s debt to GDP ratio is 50% by 2014. This calculation only addresses lack of reform, not a devastating war. Economically, Syria is not sustainable as an independent country.

Already the dollar to Syrian Lira ratio has reached an all-time-low where every Syrian Lira is worth $0.06 Dollar (Down from a high of $0.22 five years ago), which limits Syria’s ability to fund itself barring its depleted foreign reserves. This drop of 82% of the value of the Lira is devastating to an economy with little exports to grow its reserves of foreign currencies (See accompanying graph). .

Assad will not be able to secure new debt in the open markets, which means Syria’s capability of meeting its domestic fiscal needs are very limited to none. Therefore, Assad will have to turn to his ardent protectors to help Syria meet its $7.56b annual budget (estimated by 2013).

Assuming a $7.56b budget with little revenues to supplement it, Iran and Russian will have to commit to $7.56b annually for many years to come. In this case, both countries must ask themselves the ultimate pragmatic question: Is Assad worth $7.56b a year or are we better off forcing his ouster to build a new coalition with the moderate Muslims in a unity government for the West to accept a formula of shared fiscal obligations.

This window of opportunity has the best chances of succeeding during an Obama presidency.

After the destruction of ISIL, if Russia and Iran can see into the future, they will both concoct an orderly regime change in Syria.

Even without solid numbers to indicate the baseline scenario the IMF is looking for to stabilize Syria, the fact that oil and services revenues have diminished considerably, and the fact that most of the refugees or the displaced were peasants who grew crops for export, it is safe to conclude Syria and Assad is like oil and water.

If the West conditions its aid upon the removal of Assad (Not sure Obama would consider this opportunity) to be replaced by a moderate government where all the religious sects can participate in deciding the future of Syria (The Lebanon model France helped the Lebanese see its brilliance), and the refugees are permitted to return, then we may have a chance to force Assad out by his own benefactors.

Maybe we have a chance when, Iran, Russia may depose Assad when fiscal obligations accumulate beyond their breaking point.