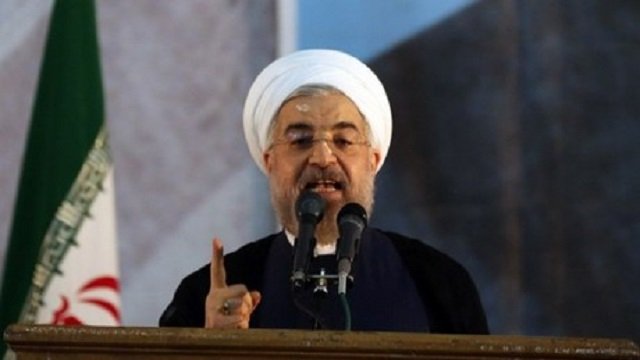 Iran Promises to Terrorize Anyone Standing in Its Way

September 22, 2015 7:33 am 0
Western Officials Need to Rethink Their Strategy of Trusting the Arab League
A logical imperative
Iran Exiles Condemn Nuclear Deal for its Uranium Enrichment

From the “I-don’t-believe-it-department” comes this gem of a speech from Hassan Rouhani. Iran promises to terrorize anyone standing in its way.

Iran’s armed forces are the best defense against “terror” in the Middle East, President Hassan Rouhani said on Tuesday, urging regional countries not to rely on world powers.

Rouhani said at a massive military parade in Tehran:

Today, the largest power against intimidation and terror is our armed forces.

Iran has been terrorizing the region since 1979 when the Islamic Revolution succeeded in deposing the Shah of Iran.

In the conflict in Syria, Tehran has been a staunch ally of the regime of Baschar al-Assad, a terrorist in his own right. Iran fought against Western-backed rebels.

On that score, Rouhani said:

We helped the armies and governments of Iraq and Syria, at their request… If terrorists start showing up in other regional countries, their only hope is Iran’s army, the Revolutionary Guards, and the Basij (militia)

Iran promises to terrorize anyone standing in its way of conquering Arab lands and people.

They shouldn’t think that Western or world powers would defend them.

In other words, forget America and come to pappy. With its proxy terror well-oiled machine, Iran promises to terrorize anyone that stands in its way.

Iran Promises to Terrorize Anyone Standing in Its Way