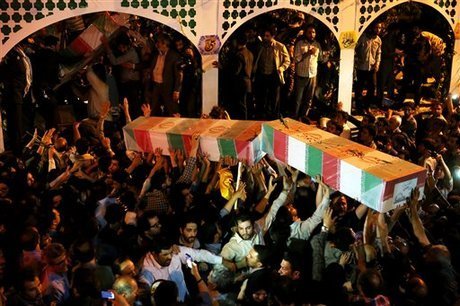 Iran mourns eight of its fighters killed in Syria. The country held a joint funeral on Thursday for eight nationals killed fighting in Syria alongside forces of its close ally Syria.

The memorial service for three Iranians, all from Tehran, was attended by around 2,000 people, the official IRNA news agency reported. An additional five fighters were buried on Thursday in Iran’s second city Mashhad which is home to a large number of Afghans.

Iran mourns eight killed in one day in Syria.

Iran says it has no combat troops on the ground in Syria or neighboring Iraq, only military advisers.

It says most of the mounting number of dead who have been repatriated from the two countries were volunteers who had traveled to defend the holy places of their Shiite Muslim faith.

Terror volunteers is code for a proxy Iranian war.

They have been accompanied by a growing number of Afghan recruits fighting against the rebels in Syria.

The Tasnim news agency said that the five buried in Mashad were members of the Fatemiyoun Brigade, an Afghan proxy unit Iran is training and funding.

It said the brigade had recently been expanded to division strength, generally between 10,000 and 20,000 men.

Elsewhere in Syria, the rebels in the south launched  afresh assault on Thursday to capture Deraa, which, if it falls, would be the third provincial capital lost by Assad in the four-year-long war, after Islamic State-held Raqqa and Idlib held by another rebel alliance.

Assad’s control is now mainly confined to the major population centers of western Syria, where he has sought to shore up his grip with the help of Lebanon’s Hezbollah Shi’ite militia, his main allies.

An alliance of rebel groups known as “The Southern Front”, which profess a secular vision for Syria, said its Deraa offensive had begun at dawn. The al Qaeda-linked Nusra Front also has a presence in the south.

With these new fresh battles, Iran mourns eight today but will be burying many more of its fighters dying in Syria in the future.

AFP and Reuters contributed to this report.