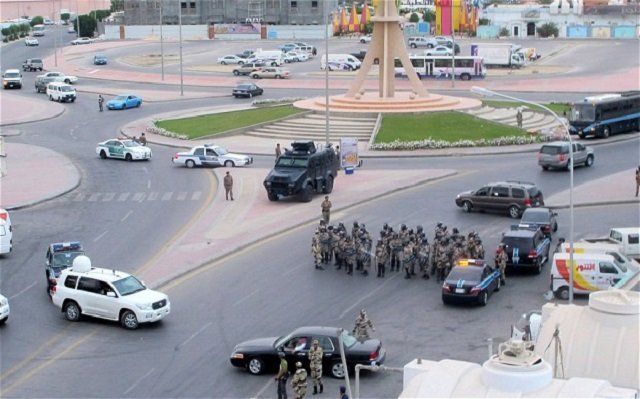 Iran may be beginning to destabilize Saudi Arabia after gunfire erupted in a Shiite town in Saudi Arabia Wednesday once police sealed it off with armored vehicles, a resident said.

Awamiya, near Dammam on the Gulf coast, has been the scene of repeated incidents since protests by the minority Shiite community began in 2011.

The resident said he saw black smoke rising over farms in the community of about 30,000 people when police moved in mid-afternoon.

“It was seen in all Awamiya,” after black armored vehicles sealed off the area.

He added that he heard heavy, periodic gunfire but could not see who was shooting.

“Saudi forces raided Awamiya, some farms,” he told AFP, adding that there was no word on arrests or casualties.

Iran nay be beginning to destabilize Saudi Arabia now that Russia is in full control of fighting the Syrian rebels on behalf of the Iranian regime. Only if Putin falters in Syria, can Saudi Arabia respond to the Iranian challenge.

In April, the ministry said a policeman died in a gunfight with “terrorists” in Awamiya.

That followed the arrest there in January of one of 23 people on a wanted list issued after the earlier protests and violence in Eastern Province.

Many others on the list had been already detained or killed in shootouts.

The Mullahs in Iran know they have little over one year to destabilize Saudi Arabia under the watchful eyes of Barack obama who will sit out helping any of the Gulf countries. Iran beginning to destabilize the kingdom may have just started.