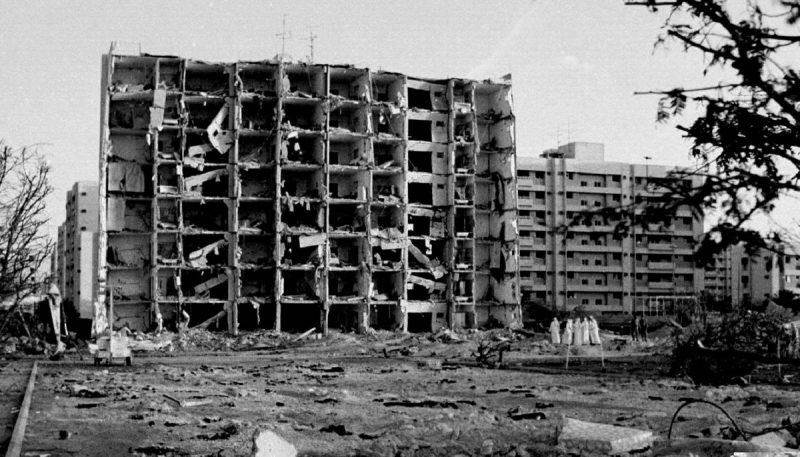 A federal judge in Washington, D.C. on Monday ordered Iran to pay $104.7 million to victims of a June 1996 truck bombing in Dhahran, Saudi Arabia that killed 19 U.S. military personnel, though it is unclear when and how the plaintiffs might collect. Iran found guilty of terror attack but thanks to Barack Obama, the families may never be able to collect.

As part of the Iran Deal, Obama agreed to unfreeze Iranian State assets. Iran received up to $150b  to include $1.7 billion in cash the Ayatollahs likely pocketed.

Chief Judge Beryl Howell entered a default judgment against Iran and the Islamic Revolutionary Guard Corps, which did not defend against claims over their alleged roles in the attack, which sheared off the front of the Khobar Towers complex.

Iran’s permanent mission to the United Nations did not immediately respond to a request for comment.

Howell said 15 service members who were at the complex when Iran bombed it could recover for assault, battery and intentional infliction of emotional distress.

The judge also said 24 relatives could recover for emotional distress from seeing how the bombing affected their loved ones.

Howell rejected punitive damages, saying U.S. law did not allow them for attacks occurring before 2008.

The lawsuit sought damages under the so-called terrorism exception to the Foreign Sovereign Immunities Act.

Paul Gaston, a lawyer for the plaintiffs, said in an interview:

The plaintiffs are very pleased with the decision, and look forward to pursuing collections. Having the court ruling gives them some measure of justice.

Thirteen members of Hezbollah were indicted in June 2001 in the federal court in Alexandria, Virginia over their alleged roles in the attack.

In December 2006, another federal judge in Washington ordered Iran to pay $254.4 million to family members and the estates of 17 Americans who died in the attack, also in a default judgment.

The U.S. government in 2015 established the U.S. Victims of State Sponsored Terrorism Fund to compensate victims.