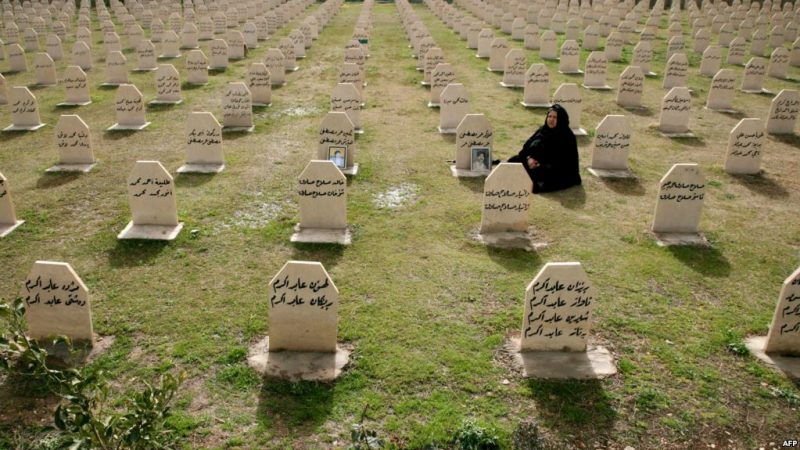 February 16, 2013 12:16 pm 0
The Message Hezbollah Supporters in Lebanon Refuse to Grasp
From Pro-Iran anti-Semite Obama to Pro-Putin anti-Muslim Trump
Syria is Down to Four Chefs in its Kitchen

The last traditional war between Sunnis and Shia was the Iraq-Iran war started in September of 1980; it lasted until August 1988 making it the second longest war in the 20th Century. In Syria today, Iran’s war backing Assad is Iran digging deepest grave yet.

It was no accident that even though the war was attributed to two countries, its reality conflicted with its designated name because it pegged a Sunni-controlled country fighting the largest Shia-controlled country, both of which terrorized their people and others. No one was victorious at the end.

Incidentally, for those who believe in the concept of “Extremists killing each other off”, both Muslim nations re-appeared stronger than before. Saddam invaded Kuwait a year later and Iran was planning Hezbollah’s takeover of Lebanon the way it is planning the takeover of Syria today through building a new militia. When people fight in the name of religion, replacements, funding, and will are never in short supply.

Syria today is the theater of a new ugly war. However, instead of pegging two countries against each other, it is an open sectarian war of Sunnis fighting Shia (and the Alawites). What is different also in this war is that instead of two peoples fighting each other, as it was during the Iraq-Iran war, the whole Middle East is involved. In my opinion, this may be the longest war in the 21 century and because its open sectarian wound is so exposed, it will be the deadliest. The savagery of the killings and the kidnappings on both sides is unprecedented.

The Sunni Jihadists entering Syria to fight the Shia Revolutionary Guards of Iran is quite alarming. In fact, we believe because Iran is using its own armed forces, it will not be long before conscripted foot soldiers from Sudan, Egypt, Saudi Arabia, Yemen, Algeria, and many other countries join the deadly melee in Syria.

In a related matter, the Gulf countries are emboldened by the rebels winning and have deviated from their earlier willingness to strike a deal w/Assad, which has been on and off depending on the volatile and dynamic changes on the ground. The defeat of Iran is far more important to their security, especially with the news that Iran may have laid its hands on a North Korean nuclear bomb.

The Gulf countries are rejecting a request by Iran to discuss Syria and Bahrain in their upcoming nuclear talks. It is an indication that Sunni Muslim countries will accelerate their clandestine funding and movement of Sunni Jihadists/fighters with a one-way ticket to Syria. The Gulf countries recently sensed that Iran has been cornered in Syria in a non-traditional guerrilla warfare that is also helping unmask Iranian hegemonic intentions in the region.

Sunni victory and Iranian intentions are on sale, if you buy one, you get the other one free.

On the part of Iran, an Obama official confirmed to the media that up to 50,000 Iranians were fighting in Syria today. As Iran builds its militia or exports its IRGC men to the front, more will die fighting. The Iranian action seems to be supplemental in nature than complementary given the ferocity of the fighting. However, Arabs have this habit of underestimating Iran and it will come as no surprise to me if Iran cunningly finds a way to defeat the Sunnis in Syria.

Given the news so far, Iran looks like it is scrambling for some oxygen. Iran digging deepest grave yet in Syria.

During last week, the Sunni-backed fighters have won three considerable battles with three distinct prizes. First, it was the moral prize of al-Furat dam, followed by a military prize in al-Jarrah airbase in the Aleppo Province and yesterday, we learned the Sunni fighters captured the Nairab airbase, also in Aleppo, from the hands of the Alawite-Shia fighters. We are told that Nairab stockpiles enough weapons and ammunition to sustain the war for a long time. Iran digging deepest grave yet in Syria.

In our honest opinion, the Iranian regime is digging its largest grave yet in Syria soaked with the blood of their revolutionary followers. My belief is based on Iran fighting superior numbers with the will to die for their freedom as opposed to less inclined IRGC forces fighting on foreign soil for a cause open to questioning (Since Sunnis are fighting the Alawites, not the Shia). Add the sanctions, the international pressure, and the new villainous image Iran has to deal with in the Arab world and one can see the trap of Syria springing to take the Iranian regime down with it.

Syria, for Sunnis and Shia, has turned into a strategic question of who controls the region. For Syrians, be it Alawites or Sunnis, Syria has become an existential question given the superiority in numbers of the Sunnis and the ethnic cleansing the Alawites are implementing.

The only positive side effect of the war is that Nasrallah suddenly has become the villain of the Arab world instead of its hero. That is welcomed news, especially to the Lebanese who suffered much from his terror. Iran digging deepest grave yet in Syria.

Meanwhile, in the US, Obama is letting both sides fight it out instead of helping to oust Assad rapidly, which would eventually defeat Hezbollah and Iran. Everyone is afraid of the consequences of a failed state in Syria occupied by hardened Islamist fighters, except the President of the United States of America.