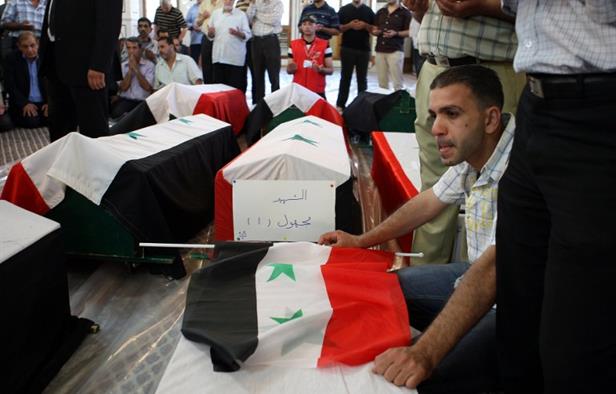 June 9, 2015 4:42 am 0
The Iranian trap
The Path of Least Resistance
15 Children from Daraa Saved the GCC Countries

Reports have emerged that Iran has taken over command of the Latakia-Hama-Idlib battlefront.

London-based Al-Quds al-Arabi said that the three officers were Sunnis who were among the regime troops that withdrew from the Mahmbel and Bsanqoul checkpoints following rebel advances in the southern Idlib province area on Saturday.

The three officers, who were also accompanied by several soldiers, were accused deserting their duty and “betraying the homeland,” the daily reported Sunday.

According to the report, none of the other Syrian officers or soldiers present at the time were able to prevent the execution as “officers responsible for military operations in the Jourin area are under the command of Iranian officers.”

A Free Syrian Army (FSA) commander told the paper that “the regime has handed over the operations room to Iranian officers and leadership.”

“The recent execution has caused a state of fear and terror among remaining regime troops,”

“There are still Sunni soldiers and officers bearing arms in the ranks of the regime’s army who will receive humiliating treatment during the coming period.”

Activists in the Latakia region also spoke to the paper about the impact the Iranian takeover of the operations room has had on morale among regime troops.

“Morale is very low among regime soldiers; in fact, it has become non-existent since the Iranian officers took over the operations room,” according to an activist identifying himself as Abu Said.

“Syrian officers, among them Alawites, have become secondary members, whose tasks can sometimes be reduced to handing out tea and coffee.”

The reported handover of power to Iranian officers follows the visit Revolutionary Guards Quds Force commander Qassem Soleimani paid to the Jourin area in late May, after which he announced that a “surprise” was in the works in Syria.

The Iraqi Kurdish Bas News outlet on Monday reported that major command changes have been conducted on the Latakia-Hama-Idlib front following Soleimani’s trip.

A Hama-based media activist said that the Syrian regime’s chief of operations in the area, General Jamal Younis, had been removed from his post and replaced by an Iranian general known only by his moniker Iffari, who set up his headquarters in Jourin.

Sarmad Khalil, an activist and member of the Hama Media Center, said in press statements that the IRGC’s military operations command is located in Hama Airbase.

Rebel-IRGC lines stretch from military checkpoints in the town of Maharda, north of Hama, through the towns of Helfaya, Tel al-Nasiriyah and Rohbet Khattab to Taybet al-Imam and the international highway connecting the Hama and Aleppo provinces, according to the activist.

The IRGC has also established a military base on Zein al-Abideen Mountain north of Hama city, Khalil said.

A top pro-Assad daily in Lebanon said last week that Iran has deployed troops into northwest Syria in preparation for a counterattack in Idlib.

AFP later reported that thousands of Iraqi and Iranian fighters have been deployed to Syria in a bid to secure the capital and recapture the Idlib province’s Jisr al-Shughur, which lies on a highway leading into the regime’s coastal stronghold of Latakia.

Iran thumbs its nose at the United States
While Syrians are Massacred, the Arab League Waves a Finger
US-Iran relations far stronger
Radicalism 567