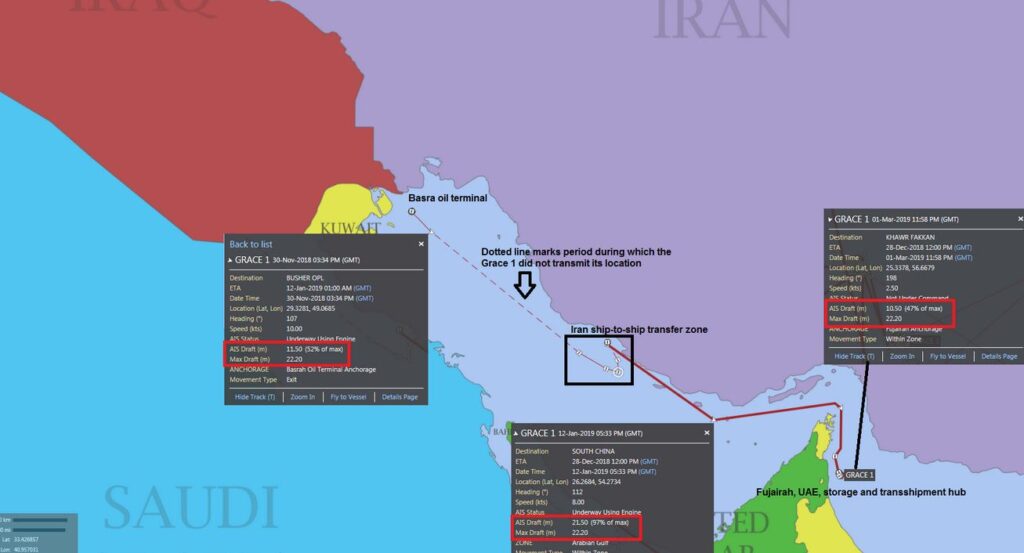 March 20, 2019 3:57 am 0
Hezbollah Demonstrating Israeli Effective Bombing Runs in Syria
Why Israel Must Announce Its Syrian Strikes
US is Tightening the Screws on Hezbollah

At least two tankers have ferried Iranian fuel oil to Asia in recent months despite U.S. sanctions against such shipments, according to a Reuters analysis of ship-tracking data and port information, as well as interviews with brokers and traders. Iran busting US sanctions in broad daylight.

The people said they did not know who forged the documents, nor when. Iran busting US sanctions in broad daylight.

The transfers show at least Iran is succeeding in busting the sanctions by trading its oil despite the re-imposition of sanctions in November 2018, as Washington seeks to pressure Iran into abandoning nuclear and missile programs. They also show how some traders have revived tactics that were used to skirt sanctions against Iran between 2012 and 2016.

While the United States has granted eight countries temporary waivers allowing limited purchases of Iranian crude oil, these exemptions do not cover products refined from crude, including fuel oil, mainly used to power the engines of large ships.

NO RECORD AT BASRA

Documents forwarded to Reuters by ship owners say a 300,000 tonne-supertanker, the Grace 1, took on fuel oil at Basra, Iraq, between Dec. 10 and 12, 2018. But Basra port loading schedules reviewed by Reuters do not list the Grace 1 as being in port during those dates.

One Iraqi industry source with knowledge of the port’s operations confirmed there were no records of the Grace 1 at Basra during this period. Iran busting US sanctions in broad daylight.

Reuters examined data from four ship-tracking information providers – Refinitiv, Kpler, IHS Markit and Vessel Finder – to locate the Grace 1 during that time. All four showed that the Grace 1 had its Automatic Identification System (AIS), or transponder, switched off between Nov. 30 and Dec. 14, 2018, meaning the ship trackers could not fins its location.

The Grace 1 then re-appeared in waters near Iran’s port of Bandar Assaluyeh, fully loaded, data showed. The cargo was transferred onto two smaller ships in UAE waters in January, from where one ship delivered fuel oil to Singapore in February.

Shipping documents showed about 284,000 tonnes of fuel oil were transferred in the cargoes tracked by Reuters, worth about $120 million at current prices.

Singapore customs did not respond to requests for comment.

Singapore-based shipping services firm IShips Management Pte Ltd, according to data manages the Grace 1, a Panamanian-flagged tanker. IShips did not respond to several requests for comment via email or phone.

A Reuters reporter visited the office listed on IShips’ website but the current tenant told him that the company had moved out two years earlier. Iran busting US sanctions in broad daylight.

The ship-tracking data analyzed by Reuters showed the Grace 1 emerged from the period when it did not transmit its location almost 500 kilometers south of Iraq. It was close to the Iranian coast with its draught – how deep a vessel sits in water – near maximum, indicating its cargo tanks were filled.

The Grace 1 transferred its cargo to two smaller tankers between Jan. 16 and 22 in waters offshore Fujairah in the UAE, data showed.

One of those vessels, the 130,000 tonne-capacity Kriti Island, offloaded fuel oil into a storage terminal in Singapore around Feb. 5 to 7. Reuters was unable to determine who purchased the fuel oil for storage in Singapore.

There is no indication that Avin International knowingly shipped Iranian fuel oil. Mylonas said his firm had conducted all necessary due diligence to ensure the cargo’s legitimate origin. Nonetheless, Iran busting US sanctions in broad daylight.

Mylonas emailed Reuters a copy of a Certificate of Origin (COO) that he said the charterers provided – referring to Blutide – showing the Grace 1 loaded fuel oil at Basra on Dec. 10 and 12, 2018.

“The Certificate of Origin and all the information obtained did not reveal any connection with Iran, let alone that the cargo of fuel oil originated” from there, Mylonas wrote.

Mylonas said the Grace 1’s owners, managers, shippers, receivers and charterers were screened by Avin International. “There were not circumstances that would make the COO of dubious origin,” he said via email.

He said he had been told by the charterers that the Grace 1 only stopped in waters off Iran in late December and early January for “repairs of damaged diesel generators” before sailing to Fujairah.

Reuters shared the document with a SOMO official in Iraq who said it was “faked” and “completely wrong”. The official declined to be identified by name, citing the marketer’s communications policy.

The two sources said the document bore the signature of a manager who was not working at Basra port on the stated dates. The document also bears contradictory dates: It indicates a loading period of Dec. 10 and 12, 2018 but a sign-off date for the transaction of Jan. 12, 2018.

Iran busting US sanctions in broad daylight, and many international players seem to game the system.

Data showed the second tanker into which the Grace 1 transferred cargo was the Marshal Z, also a 130,000-tonne vessel.

The Marshal Z was heading to Singapore in the first half of February but changed course on Feb. 15, parking off western Malaysia. Reuters was unable to determine who owns the Marshal Z, nor who chartered it.

Around Feb. 25, the Marshal Z transferred its cargo to another vessel called the Libya, owned and managed by Tripoli-based General National Maritime Transport Company (GNMTC).

Blutide registered as a company in Singapore on May 14, 2018. Its sole listed shareholder and only director, Singaporean Basheer Sayeed, said by telephone on Feb. 7 he was retired and not in a position to comment on the company’s activity.

The Libya’s owner GNMTC “was not aware, at any stage that the cargo is linked in any way to Iran,” the company’s spokesman said via email.

GNMTC provided Reuters with a copy of a COO that it said Yacht International, based in Fujairah issued. It showed the Marshal Z loaded Iraqi-origin fuel oil during a ship-to-ship transfer in UAE waters on Jan. 23.

However, Yacht International shipping manager Prakash Vakkayil said in an email his firm did not issue the certificate and “considers it to be forged”.

The GNMTC spokesman did not respond to follow-up questions from Reuters.

As of March 20, data showed the Libya was located alongside the Marshal Z offshore western Malaysia, the position vessels typically adopt for ship-to-ship transfers.

Reuters could not immediately determine whether the fuel oil cargo the Libya had been carrying was still aboard the ship.