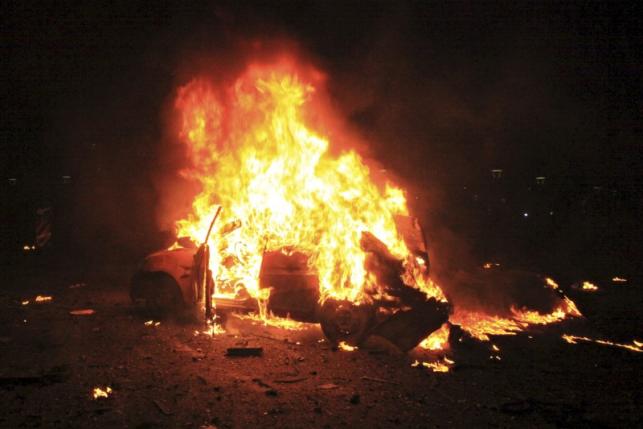 Who Is Instigating a Turkish-Kurdish Civil War?

A car bomb tore through a crowded transport hub in the Turkish capital of Ankara on Sunday, killing at least 32 people and wounding at least 75 more, the second such attack in the administrative heart of the city in less than a month. Who is instigating a Turkish-Kurdish civil war? Our bet is on Iran to weaken the largest Sunni country standing in the way of its expansion.

If Turkey falls victim to a Turkish-Kurdish civil war, Iran would be the ultimate beneficiary in Syria, in controlling the Kurdistan region in Iraq, and in isolating Saudi Arabia and the GCC countries for the easy picking.

The blast, which could be heard several kilometers away, sent burning debris showering down over an area a few hundred meters from the Justice and Interior Ministries, a top courthouse, and the former office of the prime minister.

Police helicopters hovered overhead as a large cloud of smoke rose over the city center.

The Ankara governor’s office said in a statement:

“A total of 27 of our citizens were killed when a car exploded at Kizilay’s Guven Park, and close to 75 of our wounded citizens were taken to various hospitals for treatment,”

One senior security official told Reuters initial findings suggested the attack had been carried out by the Kurdistan Workers Party (PKK) or an affiliated militant group, but there was no immediate claim of responsibility. A second official said gunfire was heard after the blast.

Another official said the car used in the attack was a BMW which had been driven from Viransehir, a town in the largely Kurdish southeast. The PKK and the Kurdistan Freedom Hawks (TAK) appeared to be responsible, he said.

TAK claimed responsibility for the previous car bombing, just a few blocks away on Feb. 17. That bombing killed 29 people, most of them soldiers, near the military headquarters, parliament and other key government institutions. It is typical of Iran to use proxies to do its dirty deeds.

The pro-Kurdish opposition HDP, parliament’s third largest party, which Erdogan accuses of being an extension of the PKK, condemned what it described as a “savage attack”.

An Ankara court ordered a ban on access to Facebook (FB.O), Twitter (TWTR.N) and other sites in Turkey after images from the bombing were shared on social media, broadcasters CNN Turk and NTV reported.

State broadcaster TRT said the car had exploded at a major transport hub, hitting a bus carrying some 20 people near the central Guven Park and Kizilay Square. It said the area was crowded when the explosion happened at 6:43 p.m. (1643 GMT).

Who Is Instigating a Turkish-Kurdish Civil War?