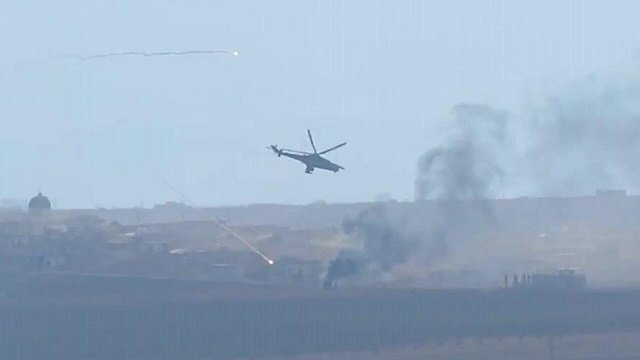 In Syria, hints of Soviet helicopter tactics from Afghanistan

Source: The Washington Post – by Thomas Gibbons-Neff (In Syria, hints of Soviet helicopter tactics from Afghanistan)

As a Syrian Army offensive, backed by Russian airpower and artillery continues into its second day in northern Syria, new video footage posted online shows what easily could be Russian Mi-24 Hind gunships engaging targets on the ground as well as one being potentially shot down.

Another indication of their Russian origin is the low-flying tactics the Mi-24s are using. Known as flying “nap of the earth,” the Mi-24s in the videos are flying mere meters off the ground. In one, Syrian opposition fighters are within stone-throwing range, firing upwards with Kalashnikovs.

Flying and engaging targets in this manner was adopted by Soviet forces in Afghanistan in the early 1980s after Russian gunships began suffering losses to shoulder-fired surface-to-air missiles known as MANPADS. Prior to the MANPADS threat, Russian helicopters would attack high-to-low in a dive.

According to a paper published in the Jan-Feb 1985 Air University Review by Air Force Lt. Col. Denny R. Nelson, Russian Mi-24 pilots changed their tactics so that they engaged more laterally, shooting at their targets from a distance while only popping up around 200ft in order to angle their rockets or cannons down on to their target.

In the videos posted from Syria, the Mi-24s can be seen engaging and shortly after firing flare countermeasures to throw off any potential MANPADS on the ground. To be clear, this doesn’t mean they’re being targeted by them; it is usually just a precaution. U.S. forces in Iraq and Afghanistan do this in low surface-to-air threat environments as well.

While the Mi-24 is very much a gunship—it is armed with cannons, rockets and sometimes even small unguided bombs—it can also act as a transport with the ability to ferry half a dozen or so troops into combat.

Early Thursday, some Syrian activists claimed to have shot down one the helicopters with “anti-aircraft” fire. While many rebel groups as well as the Islamic State have been seen with MANPADS it was unclear if that is what felled the helicopter.

If helicopters are used extensively by the Russians, the MANPADS “could have a significant operational impact,” said Matt Schroeder, a senior researcher at the Geneva-based research organization Small Arms Survey.

Mi-24s are well armored, especially on their underside. However some anti-air craft guns, specifically 14.5mm and above would have little problem damaging the aircraft.

In Syria, hints of Soviet helicopter tactics from Afghanistan

From Obama Horse Manure to Obama Horse Panic
The Strange Case of Dr. Obama and Mr. Hyde
Washington, we have a problem in Syria
Putin Terror 432