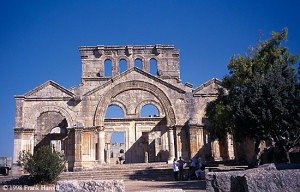 In Memory of Father Francois Murad, Shot not Beheaded

July 2, 2013 12:21 pm 0
I get it now, Assad is protected to torture Israelis
Turkey’s Spymaster Plots Own Course on Syria
The 20-Year Long Syrian Civil War

BBC has a story describing the real events surrounding the killing of Father Francois Murad, a Franciscan Catholic priest of the St. Simon monastery (Part of the ancient St. Simon Cloister or Qala’at al-Sima’an as the people of Aleppo call it).

Apparently, he abandoned the monastery, located an hour drive west of Aleppo, after it was bombed and took refuge at the convent of the Custody of the Holy Land in Ghassnaya. According to the nuns who witnessed the killing, he was gunned down as he was trying to protect the nuns after the rebels stormed the convent.

What the BBC story said of the “beheading” lie:

“The video’s title referred to the killing of a priest and a bishop, but none of the victims can be identified and none of those featured in the video refer to such an event.

After analysing the footage, local activists and Human Rights Watch said it was most likely filmed in a different location several months before Fr Murad was killed.”

Not to miss this golden opportunity, the Assad propaganda machine used an old video of a beheading by the Islamists to spread around the world a narrative that further insures the survival of Assad, which also means the terror of Hezbollah and Iran. Even FOX News fell for the “beheading” line.

Assad and Hezbollah must be laughing their hearts out at how stupid the West could be.

Politics aside, a peaceful Catholic priest is the latest victim of an inhuman civil war. A priest who probably lived his life searching for peaceful co-existence and empathy for mankind, if I had to guess, having lived amongst them as a youth. In all probabilities, there is nothing you could have said to Father Murad about the atrocities being committed outside the walls of his monastery that could have persuaded him to change his mind. More than likely, humanity, for Father Murad, had one face, one color, and one root.

May he rest in peace and may all the Christians of Syria be safe from the hell of the Assad regime who has been exploiting their fears and peaceful hearts for decades.