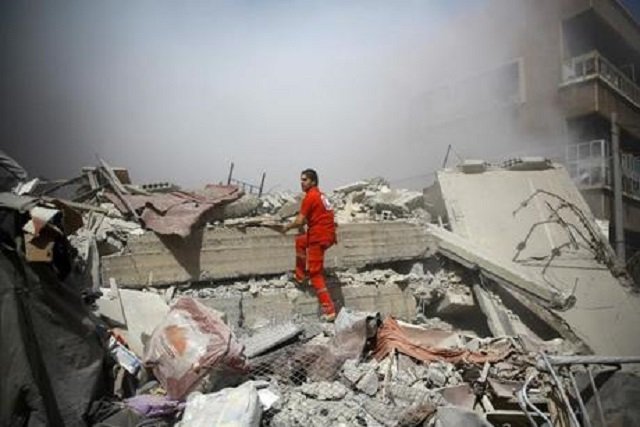 January 1, 2016 6:14 am 1
Assad’s Amnesty is Another Desperate Sign of Depleted Syrian Forces
Assad Missiles Kill Dozens of Civilians in Douma
Anyone Calling Assad to Stay is Clueless About Syrian Resolve

In 2015, Assad and ISIS caused the deaths of over 55,000 people between them. The majority are Syrians, some are foreign fighters pouring into Syria from around the world. Over 2,500 children perished in 2015 in Syria.

The total number of dead since the beginning of the conflict had reached more than 260,000, according to Syrian activists. That umber does not take into account thousands who disappeared and whose next of kin have no information about them.

In 2015 alone, 55,219 people exactly were killed, including 13,249 civilians. Among them were 2,574 children. The US admitted to killing 429 civilians during their air campaign against ISIS. Russia killed over 2,500 civilians so far in two months of bombing, and admitted to nothing if it was not for the Amnesty report that tracked Putin’s carnage.

As in previous years the dead were mostly combatants, including 7,798 rebels and more than 16,000 jihadists from the Islamic State group, Al-Qaida affiliate Al-Nusra Front and associated organizations.

The group also documented the deaths of 17,686 regime forces, among them over 8,800 army troops, more than 7,000 Syrian pro-regime militiamen, and 378 members of Lebanon’s Hezbollah movement.

A total of 1,214 foreign fighters from other countries, including Iraq, Iran and Afghanistan, died fighting for the regime. An additional 274 people were killed whose identities could not be established. Iran has been recruiting Afghanis and Pakistanis to fight in Syria.

Since the war began in March 2011, activists on the ground have accounted for 260,758 people who were killed, including more than 76,000 civilians. There may be up to 50,000 whose disappearances will make the list of Syrians killed once we know what the Assad regime did to them.

Another 40,121 jihadists have also been killed in fighting and air strikes including by a U.S.-led coalition and Russian warplanes.

Syria’s conflict began with peaceful anti-government protests but descended into a brutal civil war after a regime violent crackdown on dissent.

Syria: Reported fatwa allows the hungry to eat cats and dogs
In New Sign of Assad’s Troubles, Syria’s Druze Turn Away From Him
Obama’s 99% or Assad’s 99%, One and the Same
Assad Genocide 429 Radicalism 567