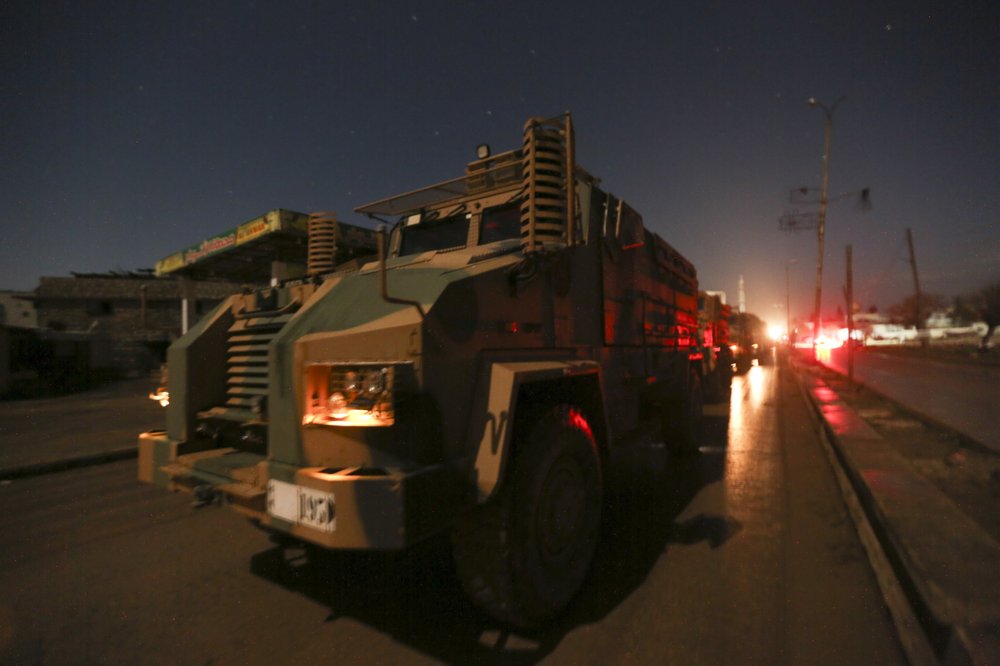 Idlib is a Keg of Powder Sitting atop an Assad Fire

The situation in Syria is reaching a boiling point. Idlib is a keg of powder with Assad lighting a fire underneath it and it has become a question of time before the Assad regime, Russia, and Turkey each unleash their hell to control fully the last territory in Syria Assad wants to fold under his tent of terror. Damascus , Tehran, and Moscow are making territorial gains by killing civilians. Turkey is protecting the civilians to end another refugee exodus across its borders.

On Friday, Turkey sent more troops and tanks to bolster its military presence in northwestern Syria. Of late, the Assad forces, with Russian backing, have advanced rapidly deep into Idlib. This sparked a massive wave of people fleeing in wet and blustery winter weather.

The push by Assad’s forces into towns and villages in the province over the past months has uprooted more than a half-million people who fled the advancing troops. Many of them already the Assad regime has displaced several times in the 9-year-old Syrian war.

The campaign also has angered Turkey, which backs the rebels, and brought the two countries’ troops into a rare, direct confrontation. Assad forces killed eight Turkish troops and Turkey responded by killing dozens of Assad troops.

As Syrian and Russian warplanes indiscriminately pounded hospitals, clinics and schools in the enclave, civilians packed their belongings in cars, taxis and pickup trucks. They streamed toward the Turkish border with few options left that are outside Syrian government control.

Many end up in tents or sheltering in abandoned buildings during rainy and windy weather. Temperatures hover around freezing.

Lorenzo Redalié, head of the Aleppo office of the International Committee of the Red Cross, said:

If they stay, they run the risk of falling victim to the indiscriminate violence taking place in urban areas. If they leave, they have nowhere to go. The shelters can’t accommodate everyone, and it is more and more challenging for humanitarians to reach them and meet their needs.

Earlier this week, Syrian government troops took control of the former rebel town of Saraqeb. It is a strategic town because it sits on the intersection of two major highways. One of them leads to the capital, Damascus, to the south, and another connects to the country’s western and eastern regions.

Turkey, which backs the Syrian opposition, has protested the government assault, calling it a violation of the truce it negotiated with Russia. In recent weeks, Ankara sent in troops and equipment to reinforce monitoring points it set up to observe a previous cease-fire, which has since crumbled, and also deployed forces around towns that are threatened by the Syrian advance.

Associated Press video showed a long line of armored vehicles and trucks, some carrying tanks, filing into rebel-controlled rural areas of the province. Monitoring groups said Turkey is deploying its troops west of the town of Saraqeb. This is the fifth known deployment of new troops into Syria over the last week.

It is shocking that civilians continue to bear the brunt of hostilities between all parties to the conflict. It appears foreign powers are battling for territorial and political gains, while blatantly disregarding their obligation to protect civilians.

Idlib and nearby rural Aleppo are the last rebel-held areas in Syria. They are home to more than 3 million Syrian civilians, most of them already displaced by violence.

Hundreds of thousands of people have been on the move in recent weeks, fleeing toward areas closer to the Turkish border. Many of them the United Nations and Turkey are housing in temporary shelters.

IDLIB IS A KEG OF POWDER SITTING ATOP AN ASSAD FIRE

Also on Friday, Russia’s Defense Ministry accused Israel of nearly shooting down a Syrian passenger jet with 172 people aboard during a missile strike on the suburbs of Damascus a day earlier. A spokesman for the Israeli prime minister did not respond to a request for comment. AP was unable to verify the Russian allegation. Israel rarely acknowledges any strikes carried out in Syria.

In reality, it was Syria’s defense missiles that almost downed the passenger jet. Just as the Iranian defensive missiles downed Iran Air flight 655.

Turkish officials say three Turkish observation posts are inside Syrian-controlled areas in Idlib. A security official, speaking on condition of anonymity in line with government rules, insisted the posts would not be evacuated.

There was a brief respite Friday from the air campaign, residents and opposition activists said, with almost no bombardment reported. It was mostly due to a storm that battered the area with strong winds and heavy rain.

The violence has also raised tensions between Moscow and Ankara, which have been working together to secure cease-fires and political talks despite backing opposite sides of the conflict.

Turkish Foreign Minister Mevlut Cavusoglu said a Russian delegation is scheduled to arrive in Ankara on Saturday to discuss the situation in Idlib. A meeting between Turkish President Recep Tayyip Erdogan and Russian President Vladimir Putin could follow, Cavusoglu said.

“We will do whatever is necessary to stop the human drama, the disaster” in Idlib, Cavusoglu said.

Idlib is a Keg of Powder Sitting atop an Assad Fire