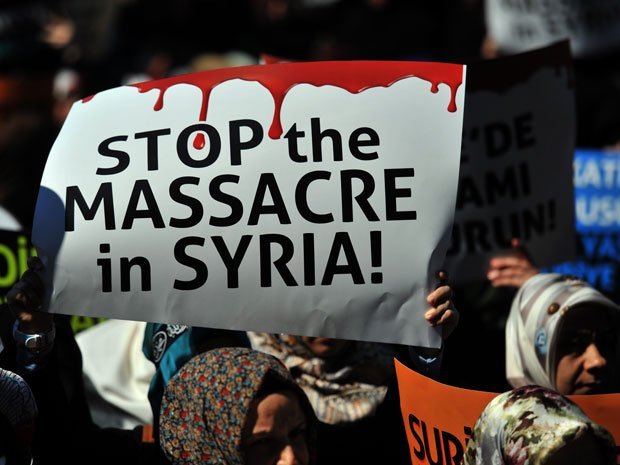 How Will Assad Be Held Accountable For Crimes Against Humanity?

March 28, 2015 6:08 pm 0
Saudi Arabia Prepared To Send Troops To Syria If Assad Won’t Leave Peacefully
Federal Syria or Not, Assad Has to Account for His Crimes
Assad Big Bang Theory: Sleuth That Carcass

Every week, The WorldPost asks an expert to shed light on a topic driving headlines around the world. Today, we speak with David Crane, a Syracuse University professor involved in the impartial effort to catalog Syrian war crimes.

The conflict in Syria has entered its fifth year. The death toll tops 220,000 and the humanitarian situation continues to deteriorate. In addition to fighting among rebel groups, Islamic State militants and government forces, there is proof of systemic killing of detainees by the regime of Syrian President Bashar Assad.

The most tangible and shocking evidence of mass murder was presented last year in a report that included thousands of photographs smuggled out of Syria by a former military policeman who has been dubbed “Caesar.” A report on these photos by top international lawyers and forensic scientists verified his account, and said there had been “industrial-scale” killing.

One of the authors of the Caesar report was David Crane, who acted as chief prosecutor of the Special Court for Sierra Leone that indicted Charles Taylor, the former Liberian president now imprisoned for war crimes. Crane is now a professor at Syracuse University, where he is involved in the Syrian Accountability Project, an impartial body documenting crimes in the Syrian war. The WorldPost spoke with Crane about his work and the future of efforts to hold those responsible accountable.

Can you speak to the scope of the crimes and the evidence that you’ve witnessed?

When I co-authored the Caesar report, we highlighted to the world that the Assad regime has been conducting a long-term industrialized killing of their own citizens for decades. The pictures coming out from Caesar — that he smuggled out in his shoe — these are high-definition, forensic photos that he took as a military forensic photographer of the deceased. The good thing about the photos is that they’re all numbered and verifiable, and we have the very person who took the photos able to verify them.

We have Caesar safely ensconced in a country that is protecting him. We were able this time last year to capture as much as 50 percent of the original photos and put them in an evidence locker. In addition, we have a chain of custody, so we can establish legally the verifiable aspects of all these horrific photos.

Something that was mentioned in your report was an estimate of 11,000 detainees that were killed.

That’s correct. How we established that was we had a great team of very experienced individuals: two former chief prosecutors, the lead prosecutor for the [Slobodan] Milosevic case, chief forensic pathologist, forensic anthropologist and a photograph expert. We were able to determine scientifically that these 54,000 photographs probably showed about 11,000 deceased.

We have no idea how bad this is and I suspect that it’s going to be far worse than imagined.

How does the Syrian Accountability Project get its evidence?

We get our data from many sources. Open-source information gives us a sense of what’s happening, and then we also have agents in place on scene, including human rights and victims groups that are reporting directly to us.

It’s fascinating, 10 years ago we didn’t have any of this concept of social media. We used to have to go out and get all our evidence the old-fashioned way. Now it’s gone completely in reverse, and there is so much information that it’s a tsunami. In most cases, it’s important information, but useless in court due to legal issues such as verification and chain of custody. Our challenge now is building a case against all these parties, and we’re very careful about not putting anything on the crime base matrix unless it’s verifiable two or three times over.

Is there a precedent for how social media might be used in court?

The information that’s coming on social media is just information, it’s not evidence yet. It becomes evidence when it’s verifiable. We’re confronted with a new phenomenon, and the legal rules of evidence require us to do certain things to verify it. It can be done, but it’s just a function of having to go back to the source — just because it’s on YouTube means nothing to a court of law. It has to be authenticated.

A lot of the data that is useless in a court of law is still important historically and for truth-telling, of course. It’s just not usable. As much as 98 to 99 percent of all the data coming out of Syria has no legal significance.

What are the step-by-step processes of bringing accountability to these crimes when the conflict in Syria finally ends?

Once the geopolitical aspect of this is solved, if it ever is, we can prosecute heads of state and henchmen for what they’ve done. We’ve done it before in the Charles Taylor case. It will be an international court — probably not the International Criminal Court because of likely Russian and Chinese objections — but we can create a hybrid international court like the special court I helped found in 2002. You may also see an internationalized Syrian domestic court or even just a Syrian domestic court. We’ve been building this trial package with the anticipation of any of that happening.

I’ll leave you with this: 10 years ago, President Charles Taylor of Liberia was the most dangerous warlord in Africa and never thought he’d be held accountable. Ten years later, he has been convicted in an open court. His appeals have been run and now he’s spending the rest of his life in her majesty’s maximum-security prison in the northeast of England.

It may seem that justice is slow, but justice is justice. The people of West Africa can look at this monster that destroyed over 1.2 million of them having been held accountable and serving the rest of his life in jail. Patience is important, and we need to keep moving forward.

How Will Assad Be Held Accountable For Crimes Against Humanity?