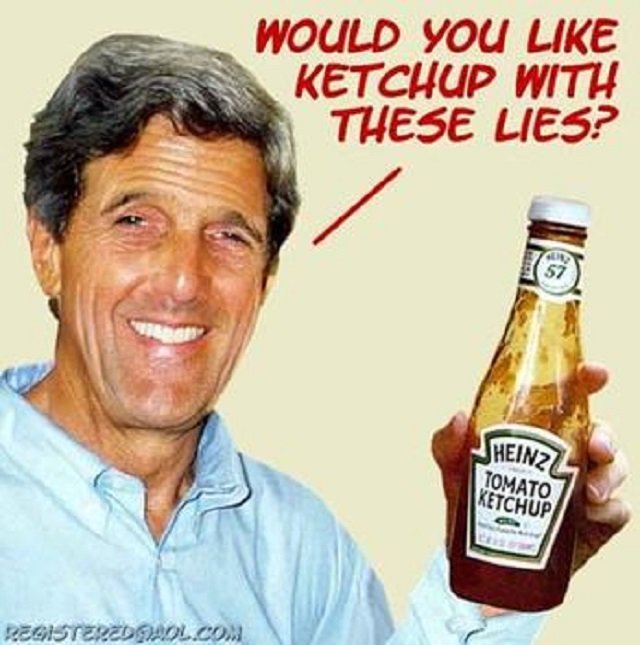 How to Kiss an Ass, by Secretary John Kerry

August 30, 2013 4:29 pm 0
For Heaven’s Sake, We Are the United States of America
Kerry’s ignorance is simply astounding
Syria’s Love Revolution

Below is the speech Secretary John Kerry made on August 30, 2013 we called it “How to kiss an ass”.

President Obama has spent many days now consulting with Congress and talking with leaders around the world about the situation in Syria.

I will tell you that as someone who spent nearly three decades in the United States Congress, I know that that consultation is the right way for a president to approach a decision of when and how and if to use military force. And it’s important to ask the tough questions and get the tough answers before taking action, not just afterward.

As we said, How to kiss an ass, by Secretary John Kerry.

And I believe, as President Obama does, that it is also important to discuss this directly with the American people. That’s our responsibility, to talk with the citizens who have entrusted all of us in the administration and Congress with responsibility for their security.

More of How to kiss an ass, by Secretary John Kerry

That’s why this morning’s release of our government’s unclassified estimate of what took place in Syria is so important. Its findings are as clear as they are compelling. I’m not asking you to take my word for it. Read for yourself, everyone, those listening, all of you, read for yourselves the evidence from thousands of sources, evidence that is already publicly available.

And read for yourselves the verdict, reached by our intelligence community about the chemical weapons attack the Assad regime inflicted on the opposition and on opposition controlled or contested neighborhoods in the Damascus suburbs on the early morning of August 21st.

Our intelligence community has carefully reviewed and re-reviewed information regarding this attack. And I will tell you it has done so more than mindful of the Iraq experience. We will not repeat that moment. Accordingly, we have taken unprecedented steps to declassify and make facts available to people who can judge for themselves.

But still, in order to protect sources and methods, some of what we know will only be released to members of Congress, the representatives of the American people. That means that some things we do know, we can’t talk about publicly.

So what do we really know that we can talk about?

We know that the regime was specifically determined to rid the Damascus suburbs of the opposition, and it was frustrated that it hadn’t succeeded in doing so.

We know that for three days before the attack, the Syrian regime’s chemical weapons personnel were on the ground in the area, making preparations.

And we know that the Syrian regime elements were told to prepare for the attack by putting on gas masks and taking precautions associated with chemical weapons.

We know that these were specific instructions.

And we know, as does the world, that just 90 minutes later all hell broke loose in the social media. With our own eyes we have seen the thousands of reports from 11 separate sites in the Damascus suburbs. All of them show and report victims with breathing difficulties, people twitching with spasms, coughing, rapid heartbeats, foaming at the mouth, unconsciousness, and death. And we know it was ordinary Syrian citizens who reported all of these horrors.

And just as important, we know what the doctors and the nurses who treated them didn’t report — not a scratch, not a shrapnel wound, not a cut, not a gunshot sound. We saw rows of dead lined up in burial shrouds, the white linen unstained by a single drop of blood.

Instead of being tucked safely in their beds at home, we saw rows of children lying side by side, sprawled on a hospital floor, all of them dead from Assad”™s gas and surrounded by parents and grandparents who had suffered the same fate.

The United States government now knows that at least 1,429 Syrians were killed in this attack, including at least 426 children. Even the first-responders, the doctors, nurses and medics who tried to save them, they became victims themselves. We saw them gasping for air, terrified that their own lives were in danger.

This is the indiscriminate, inconceivable horror of chemical weapons. This is what Assad did to his own people.

We also know many disturbing details about the aftermath. We know that a senior regime official who knew about the attack confirmed that chemical weapons were used by the regime, reviewed the impact, and actually was afraid that they would be discovered.

And we know what they did next. I personally called the foreign minister of Syria, and I said to him, “If, as you say, your nation has nothing to hide then let the United Nations in immediately and give the inspectors the unfettered access, so they have the opportunity to tell your story.”

Instead, for four days, they shelled the neighborhood in order to destroy evidence, bombarding block after black at a rate four times higher than they had over the previous 10 days. And, when the U.N. inspectors finally gained access, that access — as we now know — was restricted and controlled.

So the primary question is really no longer, what do we know. The question is, what are we — we collectively — what are we in the world gonna do about it.

As previous storms in history have gathered, when unspeakable crimes were within our power to stop them, we have been warned against the temptations of looking the other way. History is full of leaders who have warned against inaction, indifference and especially against silence when it mattered most.

Our choices then, in history, had great consequences. And our choice today has great consequences. It matters that nearly 100 years ago in direct response to the utter horror and inhumanity of World War I that the civilized world agreed that chemical weapons should never be used again. That was the world”™s resolve then. And that began nearly a century of effort to create a clear red line for the international community.

It matters today that we are working as an international community to rid the world of the worst weapons. That’s why we signed agreements like the START Treaty, the New START Treaty, the Chemical Weapons Convention, which more than 180 countries, including Iran, Iraq and Lebanon, have signed on to.

It is directly related to our credibility and whether countries still believe the United States when it says something. They are watching to see if Syria can get away with it, because then maybe they too can put the world at greater risk.

And make no mistake, in an increasingly complicated world of sectarian and religious extremist violence, what we choose to do or not do matters in real ways to our own security. Some site the risk of doing things. But we need to ask, “What is the risk of doing nothing?”

It matters because if we choose to live in the world where a thug and a murderer like Bashar al-Assad can gas thousands of his own people with impunity, even after the United States and our allies said no, and then the world does nothing about it, there will be no end to the test of our resolve and the dangers that will flow from those others who believe that they can do as they will.

This matters also beyond the limits of Syria’s borders. It is about whether Iran, which itself has been a victim of chemical weapons”™ attacks, will now feel emboldened in the absence of action to obtain nuclear weapons.

So our concern is not just about some far-off land oceans away. That’s not what this is about. Our concern with the cause of the defenseless people of Syria is about choices that will directly affect our role in the world and our interests in the world.

It is also profoundly about who we are. We are the United States of America. We are the country that has tried, not always successfully, but always tried to honor a set of universal values around which we have organized our lives and our aspirations.

My friends, it matters here if nothing is done. It matters if the world speaks out in condemnation and then nothing happens.

Turkey said there is no doubt that the regime is responsible.

Our oldest ally, the French, said the regime, quote, “committed this vile action, and it is an outrage to use weapons that the community has banned for the last 90 years in all international conventions.”

The Australian prime minister said he didn’t want history to record that we were, quote, “a party to turning such a blind eye.”

So now that we know what we know, the question we must all be asking is: What will we do? Let me emphasize, President Obama, we in the United States, we believe in the United Nations. And we have great respect for the brave inspectors who endured regime gunfire and obstructions to their investigation.

But as Ban Ki-moon, the secretary general, has said again and again, the U.N. investigation will not affirm who used these chemical weapons. That is not the mandate of the U.N. investigation. They will only affirm whether such weapons were used. By the definition of their own mandate, the U.N. can’t tell us anything that we haven’t shared with you this afternoon or that we don’t already know.

And because of the guaranteed Russian obstructionism of any action through the U.N. Security Council, the U.N. cannot galvanize the world to act as it should. So let me be clear. We will continue talking to the Congress, talking to our allies, and most importantly, talking to the American people.

President Obama will ensure that the United States of America makes our own decisions on our own timelines, based on our values and our interests. Now, we know that after a decade of conflict, the American people are tired of war. Believe me, I am, too.

But fatigue does not absolve us of our responsibility. Just longing for peace does not necessarily bring it about. And history would judge us all extraordinarily harshly if we turned a blind eye to a dictator’s wanton use of weapons of mass destruction against all warnings, against all common understanding of decency, these things we do know.

We also know that we have a president that does what he says that he will do. And he has said, very clearly, that whatever decision he makes in Syria it will bear no resemblance to Afghanistan, Iraq or even Libya. It will not involve any boots on the ground. It will not be open ended. And it will not assume responsibility for a civil war that is already well underway.

The president has been clear: Any action that he might decide to take will be limited and (sic) tailored response to ensure that, a despots brutal and flagrant use of chemical weapons is held accountable. And ultimately, ultimately we are committed — we remain committed, we believe it”™s — the primary objective is (sic) to have a diplomatic process that can resolve this through negotiation, because we know there is no ultimate military solution.

It has to be political.

It has to happen at the negotiating table.

And we are deeply committed to getting there.

Thank you, very much.

After this impassioned speech, what did Kerry actually do to protect from any future Assad terror? Nada, Nothing. Zilch.

This is how to kiss an ass looks like. You say all the right words, but not one action to support them.

How to Kiss an Ass, by Secretary John Kerry