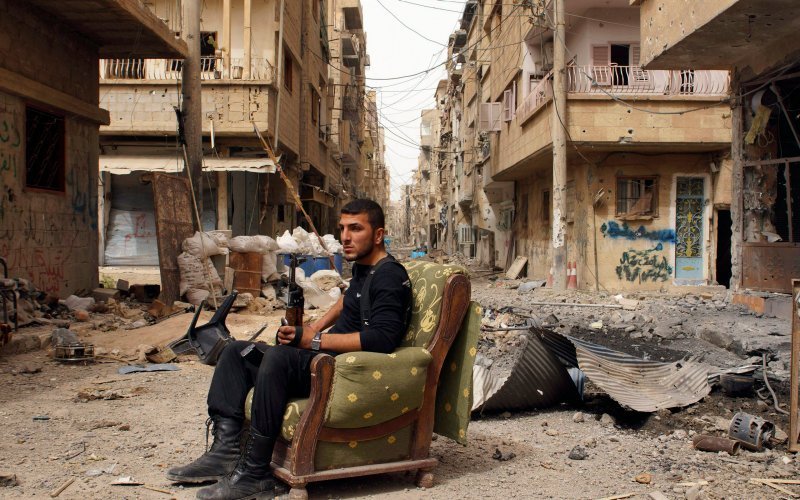 How The USA Lost Its Syrian Allies

December 8, 2013 9:43 am 0
The Obama Terror Dream Carousel
The Head Shaker Club in the Times of Barack Obama
Why Are We Intolerant of Weak Presidents?

Source: The Daily Beast – by Josh Rogin (How The USA Lost Its Syrian Allies)

As the Geneva peace talks loom, the Obama administration has been forced to reach out to the very Islamist groups it once hoped to marginalize.

As the United States moves forward with a summit it hopes will end the civil war in Syria, the Obama administration finds itself alienated from the opposition forces it tried and failed to cultivate for the last two years.

In turn, the Obama administration has begun reaching out to Syrian rebels who espouse an Islamist agenda and draw support from American allies in the region like Saudi Arabia as opposed to the United States directly.

Peace talks scheduled for next month in Geneva will involve the U.S., Russia, the United Nations, the regime of Bashar al Assad, various parts of the fractured Syrian opposition—and perhaps even Iran. But for those talks to work, all sides will have to agree to a ceasefire.

In the last peace conference in Geneva in June 2012, the United States had some leverage with Syria’s opposition and persuaded moderate rebel leaders to accept something known as the Geneva Communique, a document that purports to set the groundwork for Syria’s transition to a post-Assad government.

But in the 18 months since the first Geneva conference, the relationship between the Obama administration and key centrist opposition groups including the Syrian Opposition Coalition, the Free Syrian Army (FSA), and the Supreme Military Command (SMC) run by Gen. Salim Idriss has deteriorated along with the influence and power of these U.S.-allied militias inside Syria.

When all the parties meet again in January, the U.S. will find itself negotiating an end to the Syrian civil war that will empower the Muslim fundamentalists America once sought to tame with more moderate Syrian leaders fighting Assad.

“We are forced to engage with Islamists at this point because we have not properly supported more democratic leaning SMC and the FSA,” said Mouaz Moustapha, executive director of the Syrian Emergency Task Force, an American organization that works closely with various Syrian opposition groups. “There is limited engagement with the Islamist groups in order to bring them on board with Geneva 2, although they had made clear in the past that they don’t recognize the Geneva process.”

The moderate opposition has been so marginalized, in part due to a string of broken promises by the Obama administration, that U.S. government officials are now petitioning members of some armed Islamic groups to attend the Geneva conference, according to several sources close to the discussions.

Talking to Islamist rebel groups has become a pragmatic necessity for the Obama administration, which is caught between its desire to promote groups that share American values and the realization that any peace deal must be supported by rebel groups that have influence on the ground inside Syria.

Also, the rise of extremist groups inside Syria—especially the al Qaeda-affiliated Islamic State of Iraq and al-Sham (ISIS)—along with gains by the regime and its extremist allies, has forced Western leaders to confront the reality that the non-democratic but non-extremist Islamic groups are needed to make sure terrorists don’t wholly take over the Syrian revolution.

“If Al Qaeda and Hezbollah are the real adversaries, the Islamist groups are the best antidote,” said Moustapha.

The SMC has faced startling setbacks in recent weeks due to a lack of resources and a realignment of fighting groups on the ground under the banner of four main Islamic organizations: Liwa al Tawhid, Ahrar al Sham, Suqqour al Sham, and Jaish al Islam. Those four groups formed a new alliance last month, following the death of rebel leader Abdel Qaddar Saleh, that has become the new center of gravity for the armed rebellion.

Meanwhile, the SMC continues to lose fighters to these better-supplied groups. Idriss conceded his weak position in a recent interview with the Washington Post, in which he acknowledged that the FSA has narrowed its tactical goals and is no longer focused on holding territory.

Bob Corker, the top Republican on the Senate Foreign Relations Committee, traveled to Saudi Arabia last week to meet with top officials about the Syria crisis. In an interview from the region, he told The Daily Beast that American promises of help for the Syrian moderate opposition have not materialized, causing resentment and pushing allies to take matters into their own hands through arming of more Islamist groups.

“I am aware that there are groups there that have been more effective on the ground and in an effort to try and change the balance on the battlefield, some countries dealing with groups’ goals are limited to Assad’s demise. They feel like because of what’s happened over the last year, that’s an avenue they have to pursue,” Corker said.

The Obama administration promised to increase military support to the FSA following Assad’s mass use of chemical weapons in August, but little actual military support ever materialized. The administration also left the FSA in a bad position after announcing there would be a limited strike on the Assad military and then cancelling that strike after forging a deal with Assad to remove his chemical weapons stockpiles.

The latest blow to the opposition delivered by Washington was the P5+1 deal with Iran over that country’s nuclear weapons program, Corker and many others said.

“There’s no question that the Iranian deal has lifted the morale of the regime and it has deflated the opposition, from that standpoint,” said Corker. “The sanctions relief will allow more money to flow to Syria from Iran, so there will be a tangible effect if sanctions are lifted, that money could end up in the hands of groups like Hezbollah fighting on the ground in Syria.”

“Many Syrians feel that the Iran deal has signaled the West’s readiness to cede Syria to the Iranian Revolutionary Guards’ Qods Force and Hezbollah occupational forces. Both Iran and Assad are emboldened. A renewed commitment is needed to prevent Iranian expansion in Syria and the region,” he said.

Iran’s potential participation in the Geneva 2 discussions would be an additional indignity to those in the Syrian opposition who still seek cooperation with the United States and the West. House Permanent Select Committee on Intelligence Chairman Mike Rogers told The Daily Beast that he doesn’t think Iran should be included.

“I don’t believe Iran is an honest broker in Syria to any degree. They are operating Hezbollah, supporting them, giving them weapons, giving them intelligence,” he said. “That would not be a great outcome. You cannot continue to alienate our allies in the region, just to get a deal.”

State Department officials said that Iran would be invited to the conference if they publicly come out in support for the Geneva 1 communique, which calls for a transitional governing body to take power while elections are scheduled. The U.S. and Russia disagree over whether that body would have full executive powers during said transition.

“It’s about embracing the Geneva communique, which they have not done. If they do that, we will evaluate whether or not we’d support an invitation to [Iran] to attend the conference,” said State Department Spokeswoman Jen Psaki.

For many experts, the Obama administration’s stance is increasingly more aligned with the Assad regime and its allies than with the opposition.

“Rightly or wrongly, the administration’ view the jihadist opposition as the real enemy. What they would like is for the U.S.-backed centrists and moderates to work with the regime against the real extremists. The Iranians would like to see that as well,” said Jim Hooper, a former U.S. diplomat in Damascus.

The Obama administration’s push for a diplomatic agreement now, at the moment of the opposition’ greatest weakness, was not necessarily in the opposition’s best interest, and they know it.

“For the opposition it’s a trap. They cannot win,” he said. “You cannot recover at the negotiating table what you’ve lost at the battlefield.

How The USA Lost Its Syrian Allies