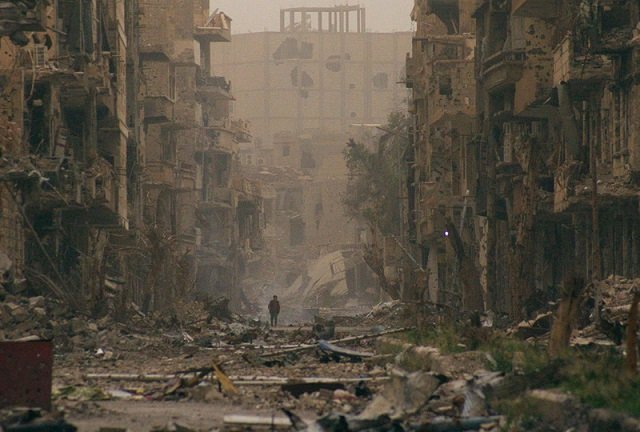 January 1, 2016 7:47 am 0
On Syria Biden Got Away With Murder
Hands Off Syria Arab League
Syria has Become Obama’s Slaughterhouse

Estimates vary between 25% to 30% the Syrian territories firmly in the hands of the psychotic Baschar al-Assad. With the exception of the stretch of land between Damascus and Latakia to include the city of Homs, Assad’s grip over Syria are pockets here and there surrounded by rebels forces. This begs the question: How long before Assad regains control of Syria?

Aleppo is split in two sectors with the Assad government holding the western sector and the rebels holding the east. The regime has been trying, unsuccessfully, to regain control of this important commercial hub for over 3 years to no avail. Even with daily Russian air strikes, the gains have been minimal. The same is true in Deir Ezzor, Qamishli, Hama, Idlib, and the vast territories between Aleppo and Sahl al-Ghab overlooking Latakia Assad has no troops to spare to dislodge the rebels.

After 3 months of heavy and constant Russian air strikes, the gains the Assad regime made are tiny to non-existent. The fighting is concentrated around towns that have become inhabitable even if the Assad regime ends up controlling.

At this rate, the question the Russian military should ask, if its intention is to insure Assad long-term viability to rule Syria, is how long before Assad regains control of Syria. All the territories he lost even if one assumes that no additional rebel fighters are joining the battles against his regime. The answer to this question is obvious. It will take years of Russian bombardments, assuming the Assad regime attrition rate of its troops has little effect on the outcome.

This may explain why Russia has been concentrating its firepower on the rebel leadership. Regaining up to 75% of Syria lost over five years of civil war will take another five years if all goes according to plans where Russia always wins its battles and the rebels always lose theirs. What are the odds?

If Russia wants Assad to control the viable assets of Syria only, such as the commercial hub of Aleppo, the oil fields in the north, the cities that form a ring around the territories held by the minorities, then it is obvious, as well, that this strategy will split Syria in two countries., possibly three if the Kurds are aided and abetted by the international community in spite of Turkish objections. Inevitably, the outcome, barring the inability of Russia to pursue a long and difficult war to re-capture lost Syrian territories, is two countries.

One country controlled by Sunni rebels who will not stop their attacks against the minorities, until the criminals in the Assad regime pay for their crimes, and another the minorities will embrace as their own. Aleppo may never find peace for a long time because the rebels would want to designate it as their new capital. The battle for Aleppo will be the fiercest and the deadliest.

How long before Assad regains control of Syria? He may never. It is even doubtful he will be able to build a security belt around the enclave of the minorities. Latakia experienced three suicide attacks that killed dozens of civilian Alawites and injured over 125 in the last 2 months.