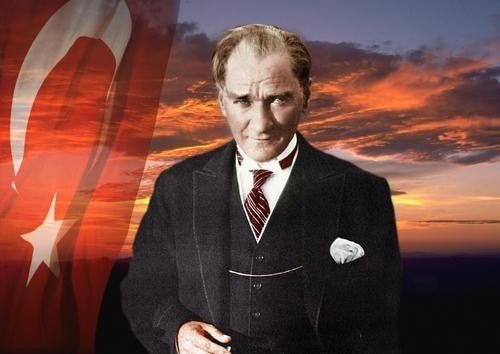 How Great Was Ataturk? Turkish Muslim Women’s Suffrage was 10 Years Ahead of Quebec’s

How great was Ataturk? Today’s children of Ataturk are protesting a Turkish Government gone astray in its commitment to liberal and secular values. Who said liberalism has no legs to stand on in the Middle East?

Why, when in full view for all to see, does the US State Department insist on supporting Islamist Governments in Egypt and Turkey when liberal views are forces to be recognized and respected? The children of Ataturk may yet save us from the misguided policies of the Obama administration.

Upon the insistence of a dear friend from Turkey, I visited, in 2005, the Anitkabir representing the mausoleum of Mustapha Kemal Ataturk in Ankara, the father of modern Turkey. Had I visited it on November 10, 2007, I would have been one of thousands of foreigners who were present, along with over 600,000 Turks to attend the 69th anniversary of his death. Turkey elected PM Erdogan on 2002 and after watching his policies change a nation to the worst over the course of 5 years, the children of Ataturk first peaceful demonstration was to attend in big numbers Ataturk’s 69th anniversary by visiting Anitkabir in 2007.

For those who have never seen this beautiful Mausoleum, here is a 360 virtual tour that will astound you.

Back in 2005, I remember, as I weaved my way through the accomplishments of Ataturk in full display in a museum, what truly struck me during the tour was the swiftness by which Ataturk was able to usher Turkey into the 20th Century under the guidance of the 1921 Constitution. I recall reading a passage that I rediscovered again in Patrick Kinross book Ataturk: The Rebirth of a Nation to address women’s rights. Ataturk said to the people of Turkey:

If henceforward the women do not share in the social life of the nation, we shall never attain to our full development. We shall remain irremediably backward, incapable of treating on equal terms with the civilizations of the West.

As you meditate over these words, imagine yourself living in a culture where subjugation of women was routine to fully appreciate Ataturk’s accomplishments. Ataturk’s leadership and vision led to women’s full suffrage in Turkey beginning in 1930, one year ahead of Spain and ten years ahead of Quebec, Canada granting full suffrage to her Quebecoises.

Yes, I am saying a Muslim country in which women were able to vote 10 years before French Canada’s women could. Understand and appreciate the greatness of Ataturk.

Stand by the young people in Turkey protesting and revel in their courage to liberate the region from the Islamists and the curse of their extremism. Lend them your support or better yet, fund a flotilla to save them from the onslaught of the Muslim Brotherhood.

My hope rests as well on the Turkish business community to expose the corruption of Erdogan and the massive misappropriations of State funds he was behind as Mayor of Istanbul, and now as the Prime Minister of Turkey.

How Great Was Ataturk? Turkish Muslim Women’s Suffrage was 10 Years Ahead of Quebec’s

Hard to Believe: Did Obama Tell Erdogan “We Will Defend Turkey Before We Defend Israel”?
Message to the Alawites of Syria
Hands Off Syria Arab League
Opinions 1017 Things That Matter 382